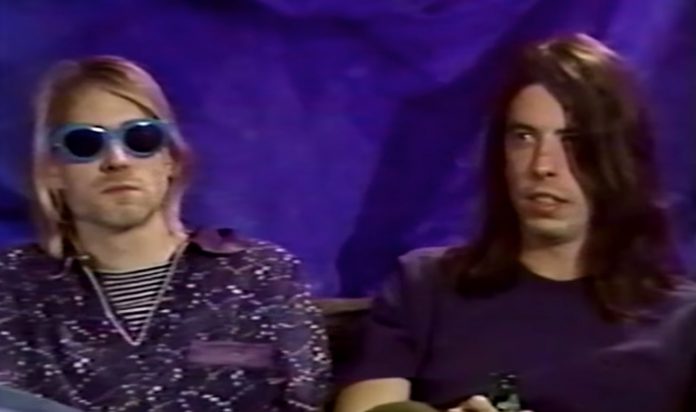 Dave Grohl discussed Kurt Cobain’s final words put to paper for a Nirvana song, with the lyrics to “You Know You’re Right” still haunting him to this day. Frances Bean Cobain wrote about ‘family trauma’ earlier this week. You can call the National Suicide Prevention Lifeline at 1-800-273-8255.

The Nevermind tour took a toll on the band. “By the time we got to Europe I remember it being cold. It was the first time I felt depression. There was one day where I couldn’t get out of bed. I started to question why we were even there.”

Nirvana recorded the song in Seattle in January 1994, featuring eerie lyrics like: “I will move away from here, you won’t be afraid of fear.”

“You look back on it and you read it through a different lens. Lyrically, it’s heartbreaking. He was in a place we may not have recognised. Musically, there’s something cathartic.” He starts to buckle. “You know, I miss his voice. I miss him…”

“I don’t think he was comfortable in the place that he was at the time. I don’t know if anybody was. But his experience was much different. I used to think it sounded like he was singing the chorus. Now I listen to it and it’s like he’s wailing.”

Dave Grohl recently took a brutal shot at American Idol. Grohl and Krist Novoselic reconciled with Courtney Love 5 years ago, and fans on the Nirvana Reddit recently discussed why Love has a divisive reputation in the band’s fanbase.

bread29 posted, “A lot of it had to do with the fact that people believed Courtney sort of ‘fueled’ his heroin addiction. I don’t know much about it and don’t really have my opinion on it, but this is generally why people don’t like her.”

newwaveb0y responded, “Courtney didn’t get Kurt into heroin, but she certainly ‘fueled’ it in that she was as fully invested as Kurt was in becoming an addict. They were a terrible influence on each other and it was much easier for people to criticize her rather than their Lord and Savior Kurt Cobain. Courtney also had a rep for wanting fame regardless of how it happened. It’s hard to argue that this isn’t the case. There is no doubt that she loved Kurt and still loves him, but back in the day she was ambitious and an opportunist. She also made a lot of poor decisions in dealing with Kurt’s addiction and depression and in many ways this can be seen as a contributing factor to his suicide.” Frances Bean Cobain recently made a video with a Foo Fighters collaborator.