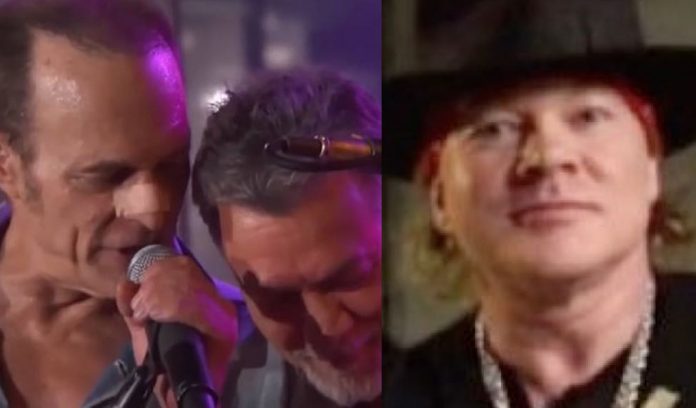 Roth said there was a problem with the hi-hat that Axl Rose’s drummer used on the album, and that Axl has the drumming redone on the entire record.

Roth said, “Continuity error… Sorry, other side, I’m looking in the monitor, here. My suspender is twisted. We have to reshoot the whole thing. That’s kind of an Axl Rose sort of thing. Axl Rose on Chinese Democracy detects a loose wingnut, -no pun intended-, the bottom pan of the hi-hat on one of the songs is clicking. We have to redo it declares Axl. The track, no. It’s the whole record.”

A Tool member revealed a painful Eddie Van Halen secret earlier this week. Duff McKagan recently told GQ about Axl Rose and Slash, “The thing about both those guys, but especially with Axl, is that there are no half measures. Axl never just phones it in. When it comes to his intensity level, he’s at 110 per cent. And the Guns community is so incredible that you can’t not deliver every time you play. We’ve travelled the world and when you see women in a full hijab rocking out and flashing the devil horns, it’s just full-on.

And they are just as excited about the band as the guy in Arkansas with the mullet who is head-banging and going crazy. Guns unites a whole cross-section of humanity and it is just amazing to be a part of. So to answer your question, the intensity is definitely still there, we just don’t burn down cities when we are offstage like we used to.”