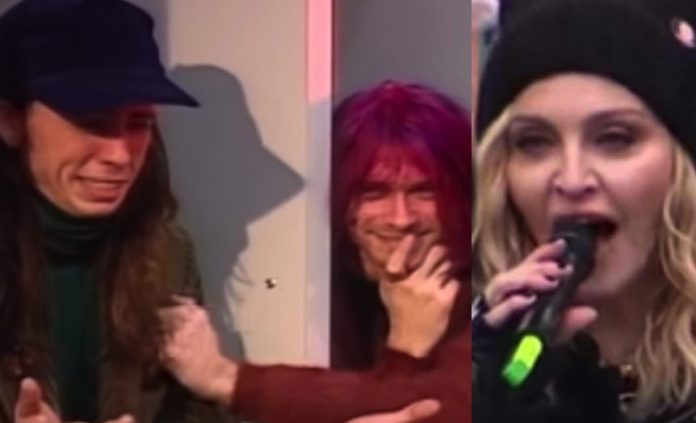 An unearthed Nirvana MTV interview clip has surfaced, and Dave Grohl, Kurt Cobain, and Krist Novoselic discussed ticket prices at concerts, including how the numbers incrementally go up from Fugazi, to Nirvana, to Madonna. The interviewer asked about artists who charge $50 to $75 for tickets at shows, and mentioned that Madonna charges $50. Alternative Nation transcribed some of Nirvana’s comments.

Dave Grohl: Yeah, but that’s like a burlesque show.

Dave: Madonna wears fur too, did you know that?

Krist Novoselic: Boy, we should charge $25 and really milk it, take it for all they got.

Dave: Let’s see how bad they really want to see the band.

Nirvana then discussed their own prices for tickets at concerts.

Kurt: Fugazi is playing tonight, how does that make you feel?

Kurt Cobain then said Nirvana shows were expensive, and they ended up making the least amount of money. Cobain said, “I don’t know, production costs are so astronomical, it’s amazing.” Nirvana manager John Silva said offscreen that the band made a 25% net from the money from shows, and Krist figures if they draw 8,000 fans, each member makes $10,000 per night.