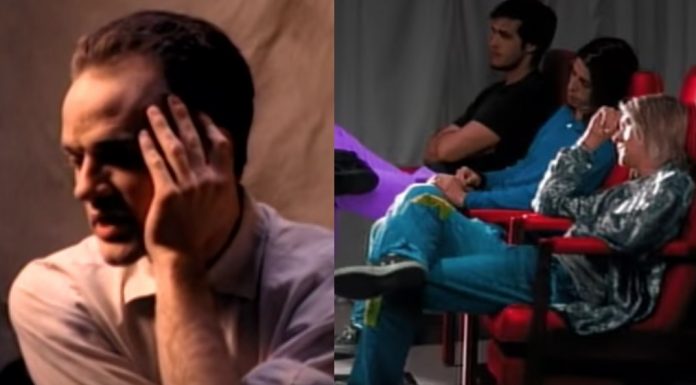 At a recent Foo Fighters show in Atlanta, Dave Grohl remembered Nirvana sleeping over at R.E.M. guitarist Peter Buck’s house many years ago.

Grohl said, “When Nirvana came and played here at the Masquerade, a long time ago, I remember that. I remember the dudes from Driving and Crying showed up: ‘Oh my god there’s rock stars here! Oh my god there’s rock stars here!’ Then the next day we played the [inaudible], that was some crazy shit. That was great actually, because that night we were supposed to drive to the next town. Peter Buck and Michael Stipe and those guys came to the show. Peter Buck was like, ‘You can stay at my house if you want to.’ We were like 22 or 23 years old, and the dude from R.E.M. was like, ‘You can sleep at my house.’”

Michael Stipe had a close relationship with Kurt Cobain, the two even planned to begin working on a musical collaboration in April 1994 before Cobain tragically died by suicide. Stipe inducted Nirvana into the Rock and Roll Hall of Fame in 2014, and he is Frances Bean Cobain’s Godfather.

Stipe said at the 2014 Rock and Roll Hall of Fame ceremony, “They picked up the mantle in that particular battle, but they were singular, and loud, and melodic, and deeply original. And that voice. That voice. Kurt, we miss you. I miss you.

Nirvana defined a moment, a movement for outsiders: for the fags; for the fat girls; for the broken toys; the shy nerds; the Goth kids from Tennessee and Kentucky; for the rockers and the awkward; for the fed-up; the too-smart kids and the bullied. We were a community, a generation — in Nirvana’s case, several generations — in the echo chamber of that collective howl, and Allen Ginsberg would have been very proud, here.

That moment and that voice reverberated into music and film, politics, a worldview, poetry, fashion, art, spiritualism, the beginning of the Internet and so many fields in so many ways in our lives. This is not just pop music — this is something much greater than that.

These are a few artists who rub each other the wrong way, and exactly the right way, at the right time: Nirvana.”

Story time with Dave ? #Repost @mmoore2784 ・・・ Dave Grohl reminiscing about playing in Atlanta in the early 90s with Nirvana and Foo Fighters and sleeping on R.E.M.’s couch. Not many 49 year olds can still look and feel like rock stars. Dave’s an exception. #davegrohl #foofighters #concreteandgoldtour #bigassstadium #atlanta #storytime