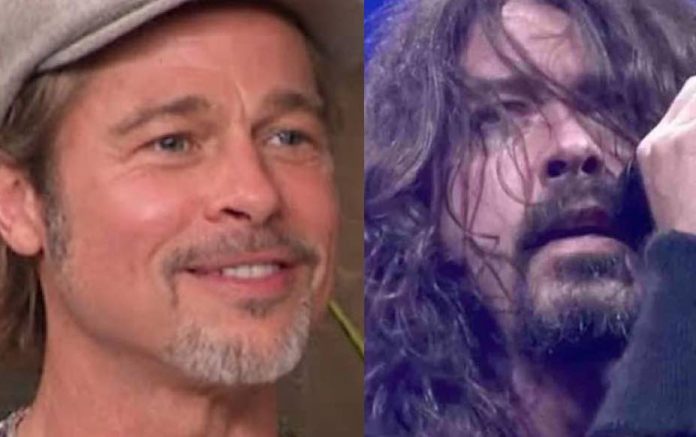 Dave Grohl and Foo Fighters are celebrating the 20th anniversary of There Is Nothing Left To Lose this month, and this has led to many vintage interviews from this period being published online for the first time, and in a classic Select Magazine article, Grohl unloads on Brad Pitt.

“People record in Hollywood and LA, they get caught up with everything that comes with it, and they totally lose the point. And there are too many other people surrounding them telling them how to make it better, or how it should be, or what it should be like.”

“He takes a deep breath. “Now, if you’re in a basement in Virginia, all you have to do is lock your fucking doors and not tell anyone where you live. Simple.”

A Foo Fighters member confirmed massive drug use last month. The last film Dave Grohl saw was Fight Club, the dark and demanding tale of two men reclaiming their masculinity by beating the living hell out of each other. According to Dave, the director David Fincher, made a great job of adapting Chuck Palahniuk’s novel and Ed Norton was “fucking brilliant”. But what ruined it was the identity of the second lead.

“I think Brad Pitt is f**king horrible,” Dave spits with real venom. “I really do. I think he is such a bad actor. There are times when the audience can’t even understand what he’s saying. It’s so monotone – no emotion at all. It’s like listening to Stephen Hawking’s junior buddy computer explaining the theory of relativity.”

Grohl also unloaded on Los Angeles, and the type of people who live there from the entertainment business. “I f**king hate that city,” he says with alarming force. “That place seems to breed a certain type of rock star, someone who just because they’re on the TV or in a magazine thinks they’re some great icon. There’s a line somewhere between fame and recognition. Recognition doesn’t seem so evil as fame. Recognition usually goes along with validity whereas fame, anyone can be famous. Anyone can be a serial killer, anyone can be a model, anyone can be a f**king sports hero and definitely anyone can be a rock star.” Dave Grohl ‘losing his voice’ and being unable to sing was revealed in a video last week.