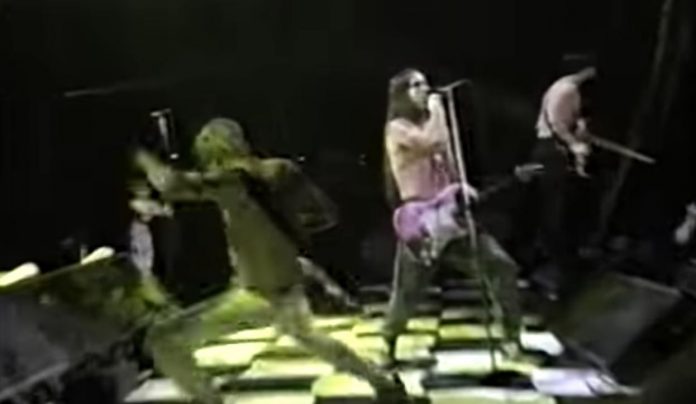 A fan asked, “Dave, sorry but out of curiosity, did you sleep with Anthony Kiedis?”

Navarro responded, “Yes, but we were in separate beds on a bus… I know, lame.”

A Red Hot Chili Peppers member made a disgusting health announcement yesterday. Navarro also recently posted about Presidential candidate Marianne Williamson, “Just because I am choosing to back a candidate and wish to push her agenda does not mean I am against anyone who votes otherwise. I am simply sharing a voice that I am enthusiastic about and that I believe deserves to be heard. We have tried the divisive anger method with each other and that really has gotten us nowhere. So, this election I am going to share what I’m for rather than what I am against. If you disagree, you still have my respect as long as you take part in the process.

I am old enough to remember the days when Democrats, independents and Republicans could disagree politically all day and go share a meal at night, because at the end of the day we are all human. Millions of men and women have given up their lives in combat protecting our freedoms. One of those freedoms is our freedom to vote. The freedom to choose and disagree. I believe it does our veterans a great disservice when they put their lives on the line for us and come home to an even more divided country.

For the past few years I have been disappointed with the extremes on both sides, to be honest. The news we get is more about in fighting and comments and comments on comments but we still have a massive homeless problem and we are in total disorder as a nation in terms of misdirected anger and adversarial talking points, while people are suffering, homeless, starving. My state of California has become more and more out of control with every passing year. The homeless problem here has reached the highest level I have ever seen here in LA.

Not only are the people on our streets suffering but now there is concern about public safety and the outbreak of typhoid and even possibly the reemergence of the bubonic plague which has been gone for 100 years. These people don’t care if someone flip flopped on an issue and want that to become the focus of the week. We need solutions as a nation and we need them now. I am not going to take any victory away from the current administration where I feel it is due, but I also feel that it’s time to shift courses as the over all emotional health of the of the country is at stake. So, I’m asking you guys to just have a look at @mariannewilliamson.”