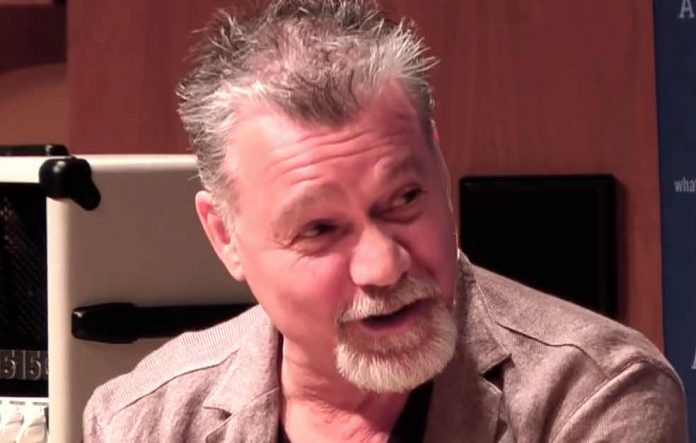 Trunk: At this point I think I think the ship has probably sailed for Sammy [Hagar] and Van Halen. I mean, if they were gonna do that, they probably would of done it all and I don’t know what’s going on with Eddie Van Halen. I’ve heard some rumors which I’ve I heard and hope are not true. I really hope Eddie is okay and I hope we get something from him in any configuration, in any way, at some point soon. However, I don’t think it’s going to happen this year and I don’t think it’s going to be with Sammy. Although, one thing is pretty obvious and if you heard the track I played earlier today from Sammy’s new record, the guy can still sing. Sammy can still sing amazingly well.

Trunk: The bigger issue with Van Halen too with the whole Sammy thing, and we talk about this all the time, we go on and on about it forever, but the real big issue, that’s really weird is that the Van Halen catalog with Sammy Hagar and the music they made with him has been virtually ignored, not virtually but rather it has been completely ignored with all these re-issue campaigns. Meaning that the Sammy Hagar portion of the catalog, which is just just as extensive as the [David Lee] Roth records in terms of the amount of records, maybe a few less but still it’s been completely ignored.

Trunk: It hasn’t been repackaged, it hasn’t been remastered, we haven’t got reissues of that stuff. Sure, records have sold millions of copies and have had a ton of hits but there’s not even a acknowledgement that, that was made and that with whatever issues may exist with Sammy those are still records that feature Michael [Anthony], Alex [Van Halen] and Eddie [Van Halen]. That is just not something that you can sweep under the carpet, although it appears that is exactly what they have been doing. or at least trying to do.

Trunk: These people are human, we gotta remember that, sometimes we forget and we just look at them as being these rock superstars that we just want to do things. They are human beings, they have lives, they have life, they have family, they have ailments, just like anybody else. So you don’t really know what’s going on behind the scenes and you know those rumors, God forbid Eddie [Van Halen] really is sick again and we hope is not but it might be the only thing that could logically explain if they spoke and communicated why they have been so inactive, quiet and silent.