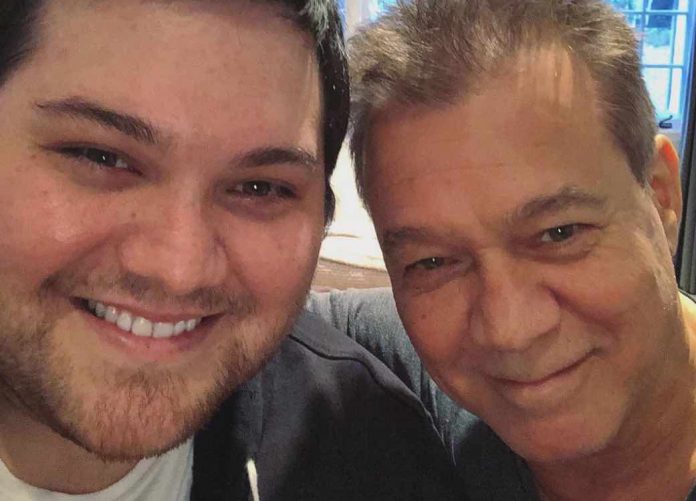 Eddie Van Halen‘s son Wolfgang Van Halen defended Billie Eilish a few days ago when she said she’d never heard of Van Halen, saying she was ‘cool’ and to ‘check her out.’ He also mentioned how music is meant to ‘bring us together, not divide us.’

Hot Dad / Uncle Erik responded saying he remarks made him sick, “Wlof, what On Earth are You talking Abou???t today’s Kids just listen to Sampler Pads;; dont play No “”Real Instruments!”; they dont Know the classics (V Halne, Stones, Hard rock, Iorn Maiden) Should be taught in school )if you Ask me DAMN STRAIGHT,,, makes me Sick to my Stomac.” Hot Dad’s ‘sick’ remarks got quoted in several articles, leading to Wolfgang tweeting him and saying, “Dude, I love how people are STILL getting baited by your comment lol.” He added, “It was perfect!!”

Adam Sandler made a painful Eddie Van Halen claim earlier this week. ArtyBoy posted on VHLinks.com about the Van Halen and Billie Eilish fanbase feud, “I guess we’re back to Dave vs. Sammy, but now I’ve been browsing Billie Eilish videos. She’s even filling arenas in Russia, and the crowd knows every fucking word! Then she’s on Ellen, and Dave Grohl is there to see her, and she’s talking about meeting Paul McCartney.”

It’s Mike responded, “Only concern I’d have is she screams one hit wonder. She often opens and closes her shows with the same song. We’ll see if she can come up with another that clicks like that. Bad guy has that catchy synth chorus which translates well everywhere. But it’s one song.”

ArtyBoy also said, “I don’t understand the mileage she’s getting out of ‘she writes her own songs.’ Like this is a rare thing? Have you heard of Soundcloud? Bandcamp? EVERYBODY on those sites is writing their own songs!

These bands I’m thinking of didn’t need development, they already had an East coast following of college kids, and pro quality independent CD’s they paid to make themselves. It was “turn key,” a record company could just slap their logo on the product and give it their advertising push to take it over the edge, but…oh, well!

When you read the back story on most big names, they spent ZERO time playing in bars. Lawyers and managers and booking agents pass along the names of who’s-who, no one’s listening to what 21 year old barflies think. I think in most cases record companies already know what will sell, and find people to play the role of whatever they have in mind. They also invent backstories, i.e. fake bios, that will increase the appeal of the product.” A Nine Inch Nails icon took a brutal shot at Eddie Van Halen over the Billie Eilish controversy.