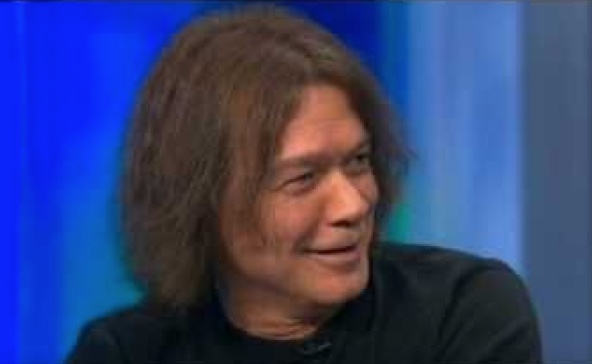 Eddie Van Halen’s beautiful wife Janie was driven to tears laughing by a new video she was sent with a giant cup of coffee. Eddie Van Halen’s family recently revealed a statement on ‘not giving up.’

Chris Burns tweeted, “@JanieVanHalen somehow I think this might be a reasonable facsimile of you.” Janie Van Halen responded, “@cburnspilot 😂😂😂.”

A Van Halen recently said he wouldn’t admit if he was dying. Sammy Hagar said he wants a Van Halen reunion in a new interview, “Even if I sit and ponder on that, which I don’t — I don’t take inventory; I don’t look back at all, ever. I’m just always looking forward, looking up, looking at the ground, looking straight ahead, and I very seldom look over my shoulder. Even if I did and I think about those times, I have more sympathy for what Eddie must have been going through personally then, because I never found out, because we didn’t communicate very well.

I was so disappointed with the [2004] tour at the time that when I tried to reach out, rarely did we connect and really have an honest love for each other. It was rough. Looking back, I feel sorry that he must have been going through something really bad. He wasn’t sharing it with me. I wish him well, and I hope they’re okay.

One last show — ‘Sammy, you’ve got one more show to do’ — boom. If those guys wouldn’t do it, I’d go park in their driveway and make them. I’d say, I ain’t leaving here. Al’s going to come over eventually, so I’ll get him when he pulls up and hog-tie his ass. Me and Mikey will sit in the car out in the driveway until they fold.”

EJC commented on VHLinks.com, “Calling out Ed’s issues on 04 tour as well looking directly into the camera, pointing, and saying ‘F*** you Eddie Van Halen’ and calling him an asshole on YouTube didn’t help his cause much… Oh well. Gotta choose your battles wisely in life Sam, and you chose that one. Actions have consequences bro…”

Darrin Stephens chimed in, “Not sure why expend energy on a Sam interview, do not like what he says wait 10 minutes he will say the opposite soon. He does such a good job presenting himself to fans and to promoting himself etc… but the Van Halen topic does him no favors. He came off as 2nd wife syndrome when in the band and out of the band ex-wife syndrome.

Goes on and on while yet claiming I’m over it, good bro cause no one else but you talking. He has done this for so long with so many contradictions really the topic for him should be a less is more thing as puts him in the worst light. He is very sincere etc… on so many topics but the all over the place on VH is just an eye roll at this point.”

Hagar made the comments in an OC Weekly interview.