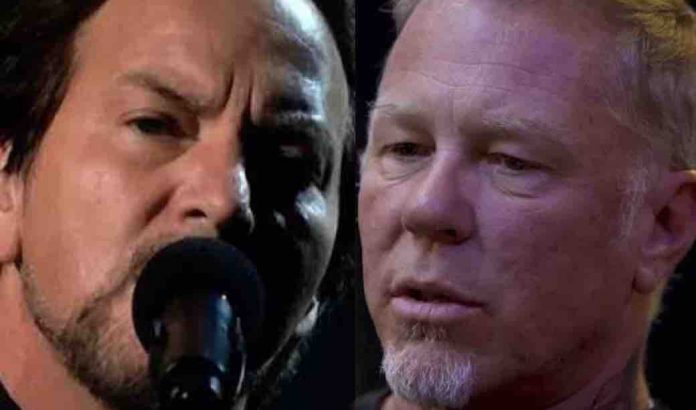 Eddie Vedder, the lead vocalist and guitarist of Pearl Jam, related a humorous story about a Metallica concert where something unexpected happened.

Pearl Jam was performing in Oakland, California on May 12 when Vedder talked about how a pregnant woman’s water broke and she gave birth to a baby during Metallica’s concert in Brazil, and how James Hetfield called her. You can see Vedder discuss the story in a video below.

At a Metallica concert on May 7, a fan who was 39 weeks pregnant went into labor and gave birth inside a tent in the stadium when the band was playing “Enter Sandman.”

“[…] During the encore – this woman is with her husband and her water broke. Have you heard this story? True story, it just happened. They didn’t have time to get her to a hospital so they got her to a tent on the side of the stage and they delivered a baby right there,” Vedder told the audience.

“But the best part, they were playing ‘Enter Sandman.'”

It became a viral moment as Joice M Figueiró documented the event on Instagram and even Metallica reposted it.

James Hetfield congratulated the woman via a phone call afterward as seen in a YouTube video. The baby boy was named Luan and was born at 11:15 PM at the show.