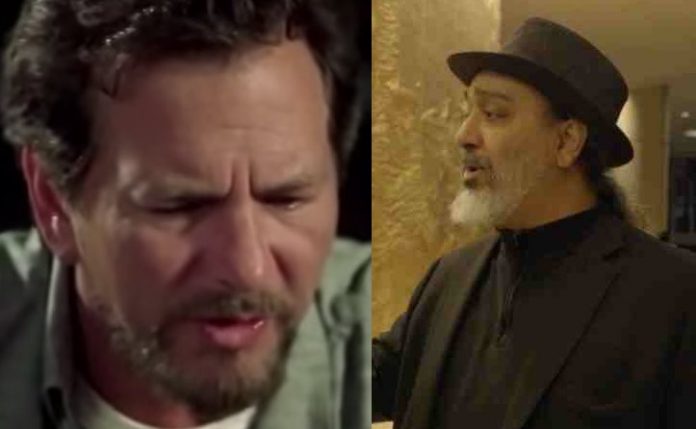 Pearl Jam frontman Eddie Vedder recently took a photo at Easy Street Records in Seattle with a fan next to the new Soundgarden record Live At The Artists Den. Kim Thayil recently claimed that Soundgarden need vocal files Chris Cornell was working on to finish their new album, but that his camp will not send them.

Kim Thayil recently told Kerrang magazine about Soundgarden, “Basically, people were used to interviewing rock bands that were groomed and prepped by the record labels and managers to be stars. We didn’t care. We weren’t out to get laid and we weren’t out to get high, we just wanted to fucking make you hurt by listening to our music (laughs). A lot of people in Seattle were like that – the guys in Mudhoney, Green River, Nirvana, and Melvins. We didn’t need to take anyone’s praise or criticism.”

Smashing Pumpkins frontman Billy Corgan dropped a new Soundgarden album bombshell last month. Thayil also told Kerrang, “Seattle kind of had that vibe, nobody was that interested in ‘rock’ – they were interested in songs, music, and playing, but rock culture was ridiculously silly. That was spandex and hairspray and pouting and girls dancing on the hood of a car – it was stupid. How can guys with degrees in anthropology or English literature take that kind of crap seriously?” Eddie Vedder making a painful The Who revelation was detailed yesterday.