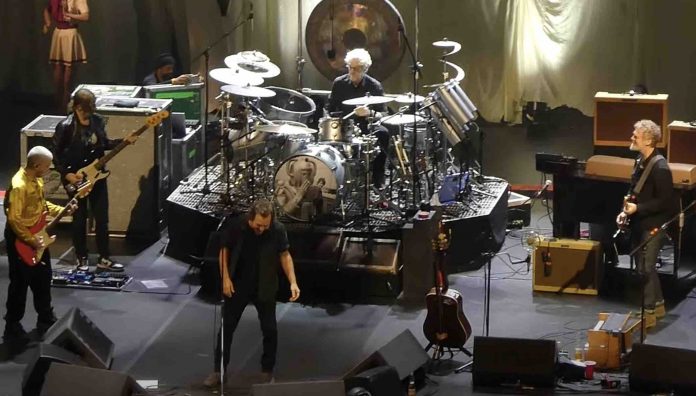 Pearl Jam frontman Eddie Vedder was joined by Stewart Copeland in Los Angeles last night for an impromptu “Message in a Bottle” The Police cover. The cover was solid, but Vedder did forget the lyrics at first. You can see the video below. Vedder just paid tribute to Mark Lanegan.

MiesterDer posted on the Ten Club board, “Amazing night. Ed pointed out during Message in a Bottle that they had ‘no practice’ on that song. I got the impression it was impromptu when Copeland started a drum riff and the guitars followed. Ed didn’t know the words to the beginning at all. Very fun.

I’m not a Chili Peppers fan, so Chad Smith on drums was new to me and he was unreal and very entertaining all night.”

That version of Porch was face-melting. Chad Smith was on fire all night, really enjoyed that drum solo. Having Benmont Tench added to the show for sure and Copeland’s ending was fantastic.

I was in the 7th row and was sitting next to a childhood friend of Andrew Watt. He and his friend seemingly really had no idea about EV or Pearl Jam. His friend (from NY) went to dinner the previous night with Watt and all the band members minus EV were there. He showed me a video of Andrew Watt playing at his wedding and a short email sent in 2009 stating he was going to play with Vedder someday. They took off early and missed Watt smashing his guitar… but I had already rushed the stage on the encore like so many others. Security gave up trying to disperse us.

Watt gave what was left of the smashed guitar to a kid who also got a tambourine from EV. Pretty cool for the kid but it seems to encourage more parents to bring kids and put them on their shoulders for most of the show. Didn’t bother me, but I wasn’t right behind them either.

The cover of the Band version of Baby Don’t You Do It was a highlight for me. EV said they played it after the second Seattle show when they jammed at his house till 5 am. Needed a horn section to play it live, and of course, JK knew some fellas. They nailed it.

The cover of Message in a Bottle with Copeland was a little clunky at first, but they got it down. Copeland was having a blast up there on that one and RITFW. He is one of the all-time greats for sure and came in cold and brought it (I NEED to see an Oysterhead show someday). Smith grabbed a guitar to jam on that song. Chris Chaney is an awesome bassist, the rhythm section was rocking all night.

The cover of I’m One was great as well. I’ve never really liked the Dirty Frank tune, always thought it was a throwaway, but it was a fun song to see live, kind of like Sweet Lew at Ohana. It almost seemed like EV didn’t want to play it, but Smith and Chaney started the song and EV looked back and laughed and started singing.

Having Benmont Tench added to the TP covers. The Waiting was particularly special as mentioned earlier in the thread.

The songs off the album were great, and OV singing My Father’s Daughter was cool to see live. She sounds as good live as on the album. The amount of talent on the stage is kind of astounding when I stop snd think about it.

The venue sounded great, very intimate (I think the furthest seat is 134 feet from the stage) and that embedded L-Acoustics sound system did the trick.”