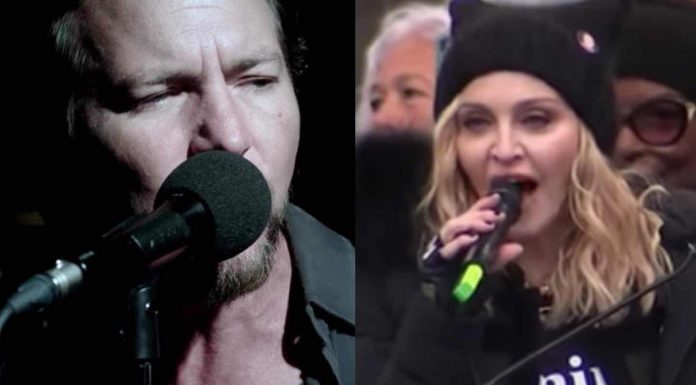 According to the PearlJam.com forum recap, Eddie Vedder told a funny bit about being featured in Rolling Stone magazine with Madonna on the cover, with her figuratively spanking him.

He introduces one of the greatest friends, father, husband, drummer Mr Matt Cameron. Ed talks about living in the rehearsal space in the early days and finding out that he was going to have his picture in Rolling Stone magazine. He talks about going to find the magazine, Madonna was on the cover and Ed digresses with a short bit about Madonna spanking him. The picture was there and it was Temple Of The Dog. There it was. He showed the magazine to the proprietor of the shop. He told the owner that it was him in the photo. The owner though it was neat and asked if it was a bike magazine. Ed learned perspective. “But this is a cover that really means something,” referring to Stone on the cover of Real Change.

At another point of the show, Ed greets the audience and asks if they mind if he drinks tonight? “Damn if this concert thing isn’t a great demonstration of our right to assemble.” Ed thanks the Mariners for letting them use the field. The shows are centerpiece of a much larger project. Ed said he realized they were nervous because they have never played a show that raised eleven million dollars to help the homeless. This song goes to some old Seattle residents that might still be hiding.