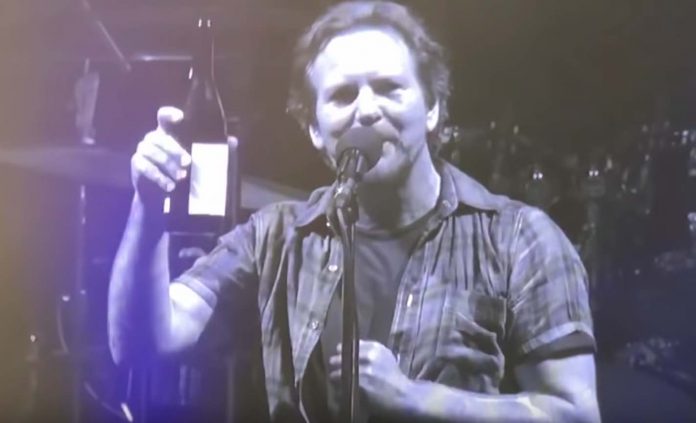 Eddie Vedder discussed Johnny Depp at Pearl Jam’s show on Friday. A fan tweeted, “Eddie Vedder did not talk about Johnny Depp’s case, but he DID mention JD as being at Bay Area PJ shows & partying with the band (along with The Stones)! #Justice4JD.” Below is a setlist and recap from the show via Sea on the PearlJam.com forums.

{“Good evening. This one’s for Gretchen.”}
Josh Klinghoffer drums
01. Long Road
02. Given To Fly
03. Once
{Mentions Matt’s health and knows he wishes he could be here. Talks about the various gigs they have played in the area. They are here to play Pearl Jam songs.}
04. Intersteller Overdrive/Corduroy {{Interstellar Overdrive-(Barrett, Mason, Waters, Wright)-30 seconds}}

Richard Stuverud drums
05. Throw Your Hatred Down-(Young)
06. Quick Escape
07. Dissident
08. W.M.A (Josh and Richard have a duet. Richard on the drum kit, Josh on his percussion set up)
09. Mind Your Manners-(features Kai Neukermans from local band The Alive on drums)

Encore Break
{Ed talks about the guy who has been driving them to venues here in Oakland for 30 years. As well as musicians like Pete Townshend and Paul McCartney. “He never gets in the spot and he should. He is our friend and our confidant. Mr. Butch Hanke (?). }
18. Bee Girl (Jeff acoustic guitar)
{Facing the back of the venue Ed says he is “singing this to you exclusively”}