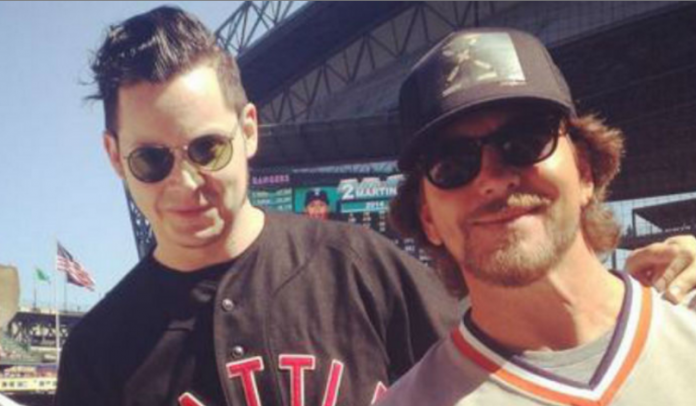 Pearl Jam frontman Eddie Vedder kicked off his summer 2019 European tour on Sunday in Amsterdam. PearlJamOnline reported that Vedder told a heartwarming story about hanging out with Jack White and Tom Petty before Petty’s tragic 2017 death. The story was told before a heartbreaking performance of “Wildflowers.”

“First show of Eddie Vedder’s 2019 European tour. The concert began on the notes of the thrilling Keep Me In Your Heart by the late Warren Zevon. After Sometimes , Eddie Vedder revealed his love for Amsterdam by adding that he played more in this city than in Seattle.

During the main set which saw Indifference debut in a solo concert by Pearl Jam singer, Eddie was joined on stage by the Red Limo String Quartet for Can’t Keep , Sleeping By Myself and Guaranteed. Before Wildflowers, Eddie recalled a night spent in 2012 with Tom Petty (the writer of the song) and Jack White in Amsterdam.

The encore was opened by Alive , played by the Red Limo String Quartet with Eddie Vedder at the side of the stage. Glen Hansard joined Eddie on stage for Song of Good Hope and for a busker-style version of Sleepless Nights . Then Jake Clemons – E Street Band saxophonist, nephew of the late Clarence – took to the stage to play on Bruce Springsteen’s Drive All Night . The mini tribute to the Boss went on with a version of Open All Night played by Eddie alone with the electric.”

{Ed back on stage}