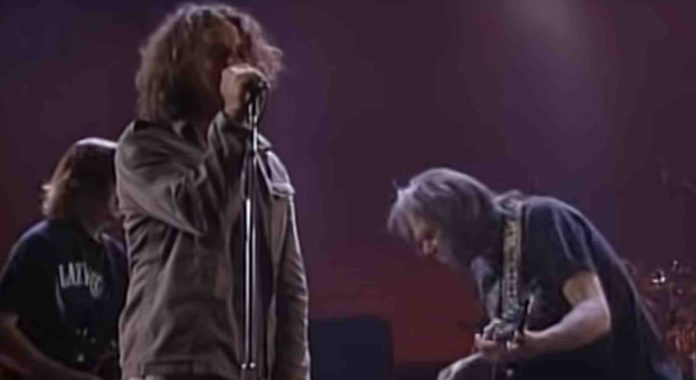 Eddie Vedder and the Earthlings played a warm up show last night in New York, and Vedder covered Neil Young’s “Rockin’ in the Free World” as his final song after the controversy with Joe Rogan on Spotify.

Eddie Vedder and the Earthlings are warming up for their first tour with a private gig tonight at the Capitol Theatre in Port Chester, just north of Manhattan. The set so far has included Drive by REM, Room at the Top by Tom Petty and Here Comes the Sun by the Beatles. pic.twitter.com/Jc12vMja4M

It has come to light that an SM58 vocal microphone cover by Eddie Vedder on various Pearl Jam tours between 1992 and 1994 has gone on sale on Julien’s Auctions. It broke off at some point when Eddie threw the microphone down on the stage. Previously, Eddie Vedder’s rant about retirement was revealed.

It has been noted that the microphone cover comes from the private collection of veteran drum technician Jimmy Shoaf who joined the Pearl Jam touring crew in early 1992 where he was Dave Abbruzzese tech for three years.

Jimmy traveled with Pearl Jam domestically and internationally on their ‘Ten’ and ‘Vs’ tours and was present for the entire duration of ‘Vitalogy’, which was recorded in Atlanta, New Orleans, and Seattle. He has been credited as the drummer on ‘Satan’s Bed’ (on ‘Vitalogy’) and re-joined Pearl Jam in 1996 on the ‘Yield’ tour in the capacity of production assistant.

Before his association with Pearl Jam, Jimmy Shoaf was a drum tech and/or lighting engineer for Corrosion of Conformity, Alice In Chains, and Soundgarden. Between 1994 and 2001 he was on the road with Rage Against The Machine.

Eddie Vedder recently announced his third solo album Earthling, invoking the radio alphabet code for “EV.” It is the Pearl Jam frontman’s 13-song transmission from beyond our world, our time, our lives, and our dimension.

Grammy-winning producer Andrew Watt, who has worked with top stars including Ozzy Osbourne, Post Malone, and Miley Cyrus, has been a Pearl Jam fan and works on many songs. Red Hot Chili Peppers drummer Chad Smith and multi-instrumentalist Josh Klinghoffer form the rest of the core Earthling band.

Earthling will be landing on Earth on February 11th and while it’s scheduled for pre-orders, a disclaimer note does say that due to issues in the supply chain, deluxe CD and vinyl formats won’t be able to ship until June of this year. Vedder’s nine-show tour will, in addition, include stops in New York City, Newark (New Jersey), Chicago, San Diego, Los Angeles, and Seattle. This would be Vedder’s first solo album since 2011’s Ukulele Songs. Stevie Wonder, Ringo Starr, and Elton John will also be contributing to the album as well.