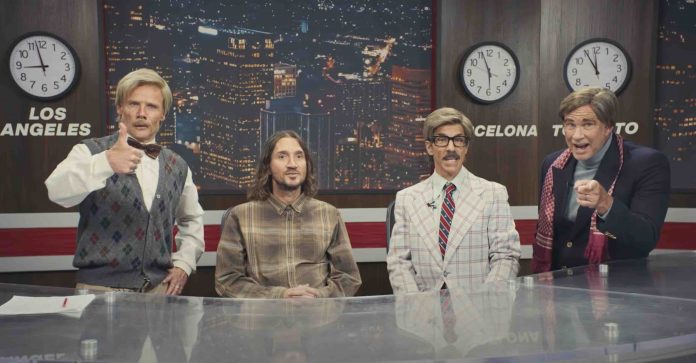 Over on the Red Hot Chili Peppers subreddit, a user by the name of Keevie posted what appeared to be image work for a rumored new single for the group entitled “Black Summer” that is alleged to come out on February 4th. The neon-inspired artwork can be viewed below.

Check out this new John Frusciante song clip here. However, while the user refused to elaborate further on the unconfirmed report, plenty of those on the subreddit for the group decided to have their say as one user named SilkAlmondVanilla proclaimed: “You guys, this is a really fun time to be in this sub.

“I know people get frustrated about the endless speculation, but honestly the buildup to an album is probably the most fun time to be a fan — especially when it’s John’s first album with the band in 16 years. When the album comes out, some people are gonna love it and others will be disappointed. It will be fun too — but right now it’s pure anticipation. Soak it in”

The Red Hot Chili Peppers, recently announced a global stadium tour that will begin in Seville, Spain on June 4th and conclude in Arlington, Texas on September 18th. A multitude of high-profile opening acts will be on hand during this tour including The Strokes, St. Vincent, and A$AP Rocky.

Another user on the social media platform, another user, PauloDapper, was confident that the rumored track will drop this week. Proclaiming that “According to a source related to JF Effects, the staff at Warner Bros. Brazil has already listened to the song and confirmed its release this week.”

The band’s last studio album was 2016’s The Getaway which featured such singles as “Dark Necessities” and “Go Robot”. That album, which debuted number two on the Billboard 200 – sold more than 500,000 units in the United States alone and is currently certified Gold.