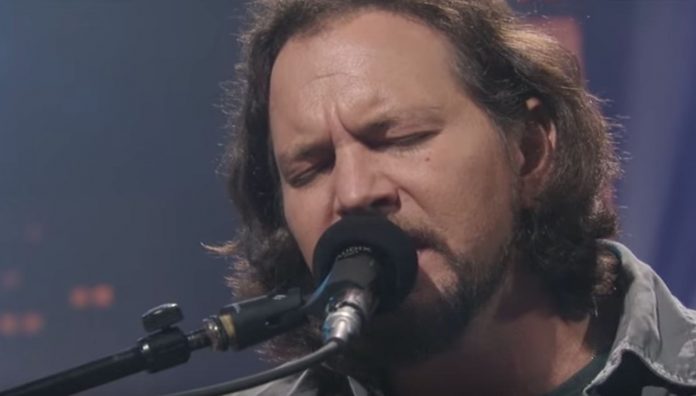 Pearl Jam’s Eddie Vedder joined several others to raise money for a noble cause. The live and online auction usually offers a rare and significant collection of guitars and other music memorabilia from U2’s The Edge, producer Bob Ezrin and a host of their famous friends who are among some of the world’s most prominent musicians. Pearl Jam’s drummer recently announced a Los Angeles concert.

The auction took Music Rising back to its roots and it has helped restore the livelihood of musicians of New Orleans and surrounding regions who have suffered through the pandemic.

.@RealMusicRising was co-founded by PJ's friend @U2’s The Edge to help musicians whose lives were turned upside down by Hurricane Katrina. Today they help musicians & crew who are struggling through the pandemic.

Eddie Vedder and others joined forces to raise money

Van Eaton Galleries’ huge Guitar Icons charity auction came to a close over the weekend, raising over $2 million in total for the Music Rising charity thanks to some record-smashing sales.

The Music Rising auction, which was organized by U2’s The Edge and producer Bob Ezrin, included Paul McCartney’s tour- and studio-played Yamaha BB-1200 “Wings” bass guitar, which raked in $496,100.

It was the first record-breaking bid of the night, and overtook Bill Wyman’s 1969 Fender Mustang bass – which sold in 2020 for $384,000 – as the most expensive bass ever to be sold at auction.

McCartney’s bass was joined in the record book by Pearl Jam frontman Eddie Vedder’s concert-smashed Lake Placid Blue Fender Telecaster, which sold for $266,200 – a figure that broke the record for the most expensive smashed six-string.
A fair share of the Edge’s own instruments featured on Van Eaton Galleries’ bill, with his “I Still Haven’t Found What I’m Looking For” Custom Strat selling for $496,100 and his Music Rising ONE guitar fetching $184,525.