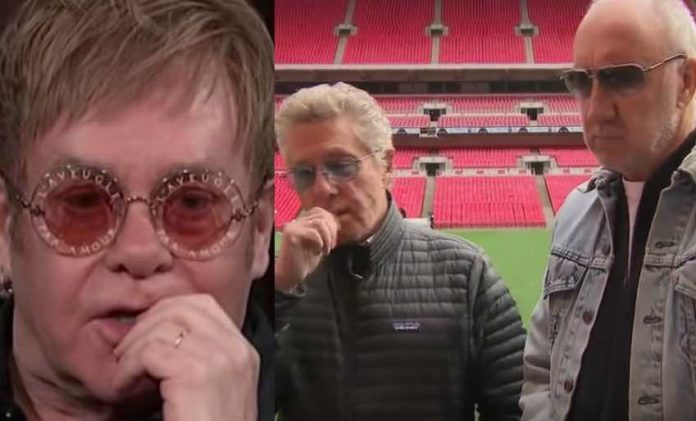 Elton John has shared new photos with The Who guitarist Pete Townshend and other big names, announcing that they raised over $6 million at his AIDS foundation’s party earlier this week. The Who singer Roger Daltrey recently made a bold Led Zeppelin ripoff claim.

“I’m bowled over with gratitude at the success of last night’s Elton John AIDS Foundation Midsummer Night’s Party. Thanks to the generosity of everyone who attended, we raised over $6 million in the fight against HIV/AIDS. A tremendous result. Thank-you to everyone who braved the heat and came to support us!! @ejaf.”

He also wrote, “I loved collaborating with Tim Rice on a new song for the latest film version of the @lionking. Check out ‘Never Too Late’ on the film’s soundtrack from @DisneyMusic and see the #TheLionKing in theatres today.”

“Incredible to think, David and I walked this same red carpet for the world premiere of the original Lion King 25 years ago – an epic film that changed my life forever.

Disney have now reimagined that timeless classic with astonishing beauty and refreshed it for a whole new generation. It is magnificent.
@lionking.”

Robert Plant recently described a battle with Elton John over a big name. John recently wrote a letter to Russian President Vladimir Putin, “Dear President Putin, I was deeply upset when I read your recent interview in the Financial Times. I strongly disagree with your view that pursuing policies that embrace multicultural and sexual diversity are obsolete in our societies.

I find duplicity in your comment that you want LGBT people to ‘be happy’ and that ‘we have no problem in that.’ Yet Russian distributors chose to heavily censor my film ‘Rocketman’ by removing all references to my finding true happiness through my 25 year relationship with David and the raising of my two beautiful sons. This feels like hypocrisy to me.

I am proud to live in a part of the world where our governments have evolved to recognise the universal human right to love whoever we want. And I’m truly grateful for the advancement in government policies that have allowed and legally supported my marriage to David. This has brought us both tremendous comfort and happiness. Respectfully, Elton John.”