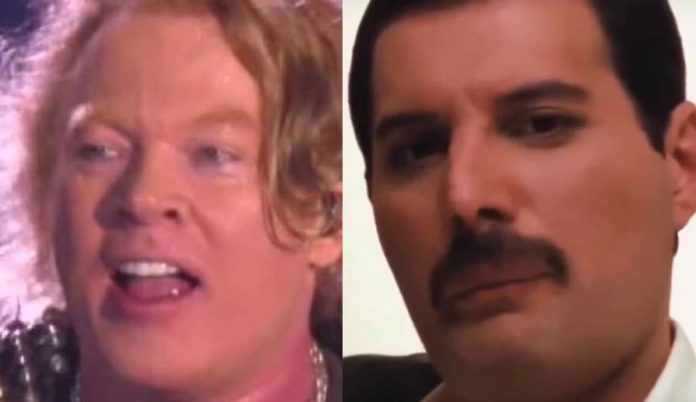 Queen guitarist Brian May had high praise for Guns N’ Roses guitarist Slash in a new Instagram post. He also praised Axl Rose, who emotionally honored Freddie Mercury last year. Rose said, “Queen is greatest band and Freddie is the greatest frontman of all time.” The amount of money Axl Rose and Guns N’ Roses spent on Appetite for Destruction was recently revealed.

Motley Crue bassist Nikki Sixx made a heartbreaking Freddie Mercury death revelation earlier this week. May previously told Uncut magazine that sadly he has still unreleased material recorded with Rose, “Can’t remember when I first met Axl [Rose], but we invited them to play the [1992] Freddie tribute. They did a fantastic job, and also donated a lot of money to the Mercury Phoenix Trust. Subsequent to that, my solo band supported GN’R on tour and we got on very well.

People think of Axl as difficult, but he was always very attentive to me. When they were making that album, after God-knows-how-many years, he was talking to [Queen’s old producer] Roy Thomas Baker, who was doing some production for them at the time, and they came up with the idea of contacting me to help them work out a direction. I flew out to meet him and he played me pretty much the whole album.

We had a long night, talking, thinking, figuring out potential directions, and then I had a couple of days just trying things out. I think I played on two-and-a-half tracks, but they didn’t end up using my parts. They used about 10 guitarists subsequent to that! I have rough mixes of these tracks somewhere in my archive, but I’m not going to let anyone listen to them, out of loyalty to Axl! It was fun, to throw something in there to help out a friend.”