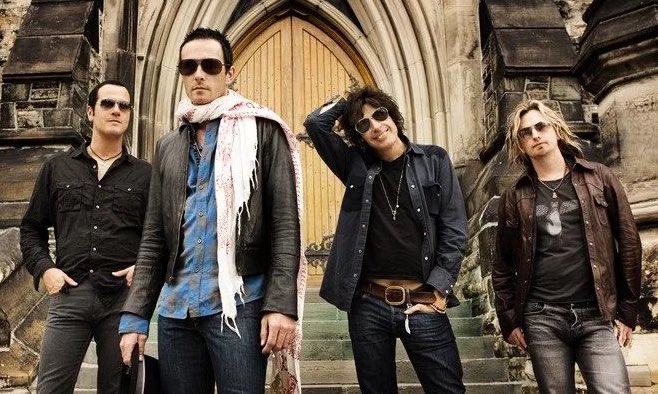 Zion, Illinois natives Local H are best known for such ‘90s alt rock radio hits as “Bound for the Floor,” “High Fiving MF,” and “All the Kids Are Right,” and continue going strong today – as evidenced by the release of their brand new live album, Live in Europe (which can be ordered right here). The group’s long-time singer/guitarist, Scott Lucas, recently answered a few questions for Alternative Nation – including his memories of when his band toured arenas with Stone Temple Pilots back in 1996.

What are some memories of touring with Stone Temple Pilots in 1996?

That was an exciting one. Everybody wanted that tour. We couldn’t believe we got it. It was fun to see the big machine at work, but that was never a thing we could pull off ourselves. We’re not a big-time band. Never were.

What were some memories of when Dean DeLeo and Scott Weiland joined Local H on stage to play “High Fivin’ MF” in Ohio (on the last night of the STP/LH tour)?

The main reason we got that tour was because Scott was a big fan of “High Fivin’.” He had come out during the show in Chicago and sang harmonies on it. I don’t think Ohio thought we were any good, though. That was the last show of the tour and our first “booing.” Fuck it. [Check out the videos below!]

How did the idea of Dean DeLeo playing on the track “Cool Magnet” (on the Pack Up the Cats album) come about, and what were some memories of the recording session?

I knew I wanted a classic rock type of solo for that. And Dean can play circles around me, sooo…Dean was psyched to meet [producer] Roy Thomas Baker. I think Roy was primarily the reason ANYBODY wanted to work on that record. But Dean was also a little bummed that the song wasn’t in the key of E. He was ready to go to “pull-off town.”

It’s been almost thirteen years since Local H’s last live album – what made you decide to do another one now?

We’d never toured Europe before. I know. It pisses me off. But we made a concerted effort, over the past few years, to get over there. Finally, Helmet invited us over — and we were psyched. We love those guys. Anyway, we thought, “Fuck it. Let’s record some shows and see what we come up with.”

Which tunes do you enjoy performing live, and why?

The longer ones. The ones that lean towards the psychedelic side. “That’s What They All Say,” “Buffalo Trace,” I don’t know. I like that kind of shit. It’s nice to lose yourself.

What are Local H’s future plans?

We’re in Europe in February. Touring with Everclear in the summer. Have some tentative plans in the fall. Things are alright.