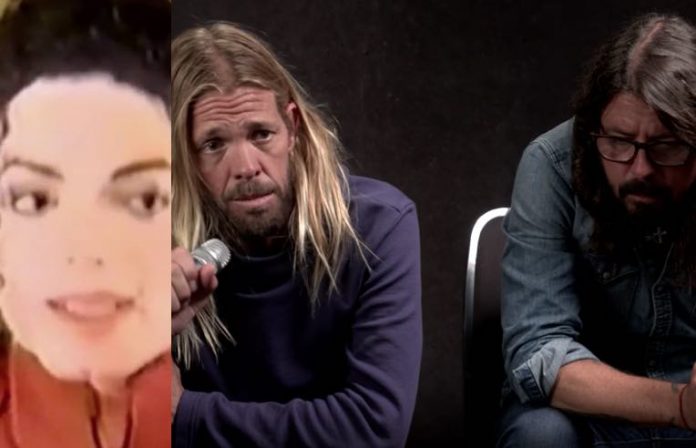 Foo Fighters drummer Taylor Hawkins discussed his fandom of Michael Jackson’s first group the Jackson 5 in a new Mojo magazine interview when discussing his favorite albums growing up. A Foo Fighters member confirmed massive drug use a couple of days ago.

“Well you know, it’s hard to pick one. I had a couple of records that did that. I was playing the drums aged 10 to Queen’s Live Killers and Adam & The Ants’ Kings Of The Wild Frontier, and I loved the Jackson 5 when I was younger. Also, Abbey Road is my favorite Beatles album, but I love Help! too.

But, and I know it sounds so stupid and I wanna sound smart and pick The Velvet Underground or something way more cooler, really it’s obvious – it’s The Beatles’ Red and Blue greatest hits.”

Taylor Hawkins revealed if Foo Fighters have big plans for their 25th anniversary in 2020, including a rumored new album that Dave Grohl has discussed, in a new Kerrang Magazine interview. Dave Grohl looked like a stoner in a new party photo revealed yesterday.

“Well, it’s very possible,” Taylor says. “There’s a lot of talk, and I think Dave is already mapping out what he wants the next record to be, so I wouldn’t be surprised if there’s something coming down the pipe. I can’t 100 per cent spell it out for you for sure, because I’m always the last to know and I don’t want to give it away. But I would imagine there will be something made of the 25th year of the Foo Fighters, for sure. You know us, we never stop.”

Foo Fighters recently wrapped up a European tour and have said that they intend to work on a new album in late 2019 going into 2020. The Foos last released Concrete and Gold in 2017. Dave Grohl leaked a stunning The White Stripes photo a few days ago.