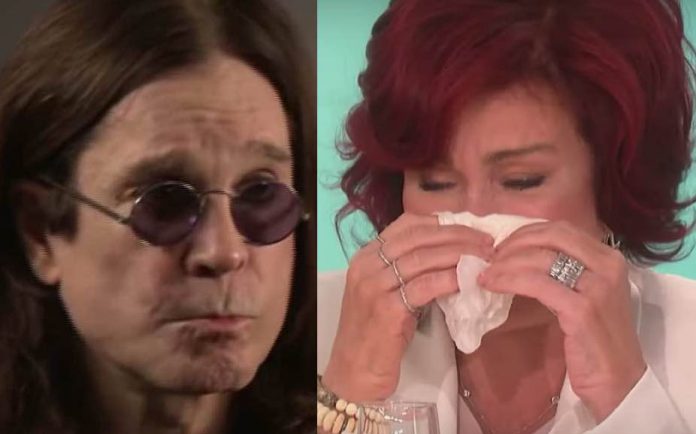 Ozzy Osbourne‘s wife Sharon Osbourne might love plastic surgery but at times it might have a price all it’s own. The Talk co-panelist and wife of “The Prince of Darkness” was recently on an edition of “The Kelly Clarkson show to tell a story an operation left her with a ‘permanent snarl’ once which led her family and Ozzy himself to state that she looked like Elvis Presley. AlternativeNation has transcribed Osbourne and Clarkson’s comments below. This Ozzy Osbourne fat gut was revealed recently in a sad photo.

Kelly Clarkson: “But here’s one thing that I love that you did. I think you did it at the beginning of The Talk this season. You talked openly about facelifts.

Clarkson: Because it almost makes it less taboo and less of a topic if you do. That’s what I love about Dolly Parton. She owns everything bit of it, she’s like “yeah, sure everything”.

Osbourne: This is just the new cream!

Osbourne: Yes, try this cream. It lifts everything overnight.

Clarkson: Is it hard? Because I’m scared of stuff like [surgery], I’m terrified. I can get tattoos, I have like, fifteen. But the thought of something like [plastic surgery] I’m scared of it. So you’re never scared? You just go in and you’re like “yeah.”

Osbourne: I am, I am. Yeah sure, because you could wake up and look like Cyclops. You never know. And I had this thing where they lifted up my mouth and then for the first week I couldn’t feel my mouth. I can hardly feel my mouth now, to be honest with you.

Osbourne: But I couldn’t find my mouth.

Clarkson: That would be handy in certain scenarios.

Osbourne: Yeah, but it’s all numb and it was up at one side and I looked like Elvis. All the kids and Ozzy are going: “Why are you snarling at me?” and I’m like, “I’, mot snarling, I’m not doing anything!” But it was this *motioning*, it was was going up.

Ozzy Osbourne’s son wants to ‘punch’ this A-List star in the face. Don’t expect Ozzy’s Osbourne’s long-time guitarist and founding member of the Black Label Society – Zakk Wylde to have anything to do with “The Prince of Darkness'” next solo album. During a recent interview on “The Cassisus Morris Show”, Wylde was asked just that to which the  Zakk Wylde denied any upcoming involvement.

“No, no. We didn’t do anything on that,” Wylde said. “Ozz, he just jammed with some friends that he knows. He was just, like, ‘Hey, Zakk, I ended up tracking some of the stuff,’ or whatever, and I was, like, ‘Oh, great, Ozz.’ That Post Malone thing [‘Take What You Want’] I heard was awesome. Post came down to a Black Label [Society] show about maybe, I don’t know, almost half a year ago or something like that, before the Ozzy thing. But he just came down and he was, like, ‘Hey, Zakk, what’s happening?’ A really cool guy and everything like that. When I heard the track, Ozzy sounds great on it, man. But no, I didn’t have nothing to do with the stuff that Ozz just recorded.” This Ozzy Osbourne bad haircut photo was just revealed.