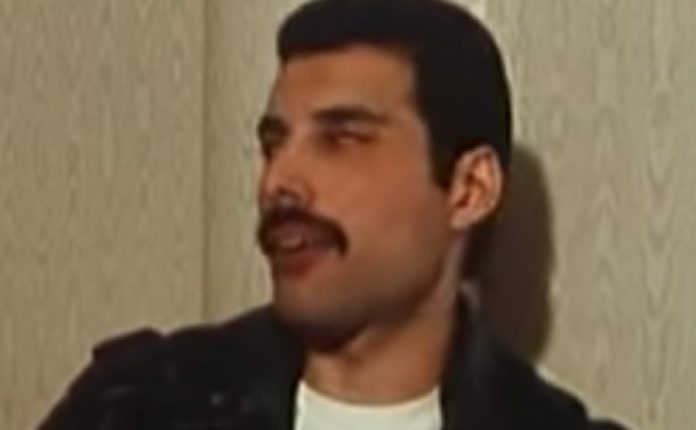 Interviewer: You’ve just started your second decade together as a band…

Freddie: Oh my God! You make feel so old!

Don’t you ever make Freddie feel old ever again. Freddie is and always will be forever young. Also look at the way he’s holding that cigarette between those two delicate long fingers…and sneaks a peak at the camera like he’s sending a message to us through time.

Interviewer: What do you think has kept the band…

Freddie: (still hung up on that last remark) Don’t I look good?

Interviewer: (laughing) Yeah you look great Freddie… (if you just let me ask my question you 2 year old kid).

The way Freddie playfully touches his own face and flirtatiously looks up asking for reassurance like a spiked little child just kills me. And the interviewer just wants to get on with the question but at the same time he bursts into laughter because he’s dazzled by this charming witty hilarious creature sitting in front of him 😍

P.S. This is right before the “money” reply which I already covered in another post so I has saved this epic 8 seconds for now to bless your #Freddie Friday with 😏.

I mean just imagine Freddie asking you “Don’t I look good?” when he looks ridiculously gorgeous with those chiseled cheekbones and jawline nose and that smooth skin and those cute dimples and that perfectly trimmed stache and those beautiful beautiful beautiful eyes…the man is oozing with charm and charisma and s** appeal and he god damn knows it.” A Freddie Mercury creepy ‘glove’ video was recently revealed.