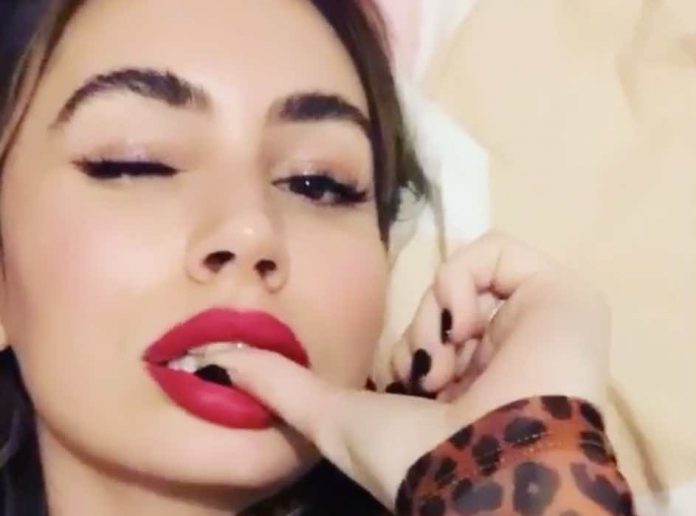 KISS bassist Gene Simmons‘ daughter, the exquisitely beautiful Sophie Simmons took to social media via Instagram to post this glamorous now-deleted photo of herself laying on a pool table. Luckily, we were able to salvage this riveting piece of content before it was deleted so you can view the photo below. Also notable prior to the delelation was the fun, playful and flirtation exchange that Sophie had with her female friend, known on Instagram as Janetski. Gene Simmons’ daughter tight robe photo at this concert leaks.

In other news regarding Sophie’s ‘demon’ dad, Gene Simmons, millennial and younger fans recently took to the KISSfaq fan forum to discuss how they got into the ‘hottest band in the land.’ Fellow forum member Bella Rogers wrote: “My husband and I met in high school. He was a KISS fan and got me into them. Revenge era is my favorite, so I’d love to see them at that time or go to the Konventions. Luckily there are lots on youtube from that era. My husband was introduced to KISS by a school friend. He likes the original 70s lineup so he’d probably want to see a show from then.

Gene Simmons daughter uses ‘toys’ in night gown photo. The user continued: “We first saw them in 2008 at the Download festival. In Manchester in 2010 and in 2019 we took our children to their first KISS concert. Seeing them again in June this year at Download. (Probably for the last time – unless they decide this isn’t the end of the road after all – I seem to remember hearing 2010 was supposed to be the last time too!) I considered the Kruise this year but the cost of travel to the US is way out of our budget, never mind the actual price of the Kruise.”

While KingofHearts89 responded: “Born in 98′, for me it was the GTA franchise. GTA has served me well in music, becoming a fan of a lot of 80s artists. I was never into the actual game itself (until my late teens) I just liked driving around listening to awesome tunes. I guess 3 major artists came from the experience, on Vice City it was Michael Jackson, San Andreas KISS and GTA 5 Def Leppard.”

Gene Simmons’ daughter parties in tight corset. The user concluded: “What’s really interesting (to me anyway) is that I did hear Lick It Up on GTA Vice City Stories and Rock & Roll All Nite on Guitar Hero (and being from the uk Crazy Nights and God Gave) but for whatever reason Strutter was the song that made me click and wanted to dig into the band.”