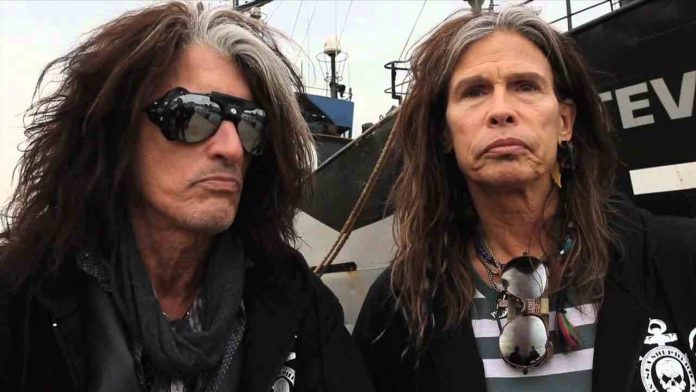 Aerosmith frontman, the legendary Steven Tyler was blunt and direct when asked in a new feature by People magazine if the group’s latest run of dates in Las Vegas, named the ‘Deuces Are Wild’ residency can be considered a ‘retirement tour’. Steven Tyler’s daughter reveals backside in this robe photo.

Tyler swiftly shot down any potential allegations, refusing to call the Vegas residency a retirement tour by telling the publication: It is an astonishing milestone, considering there were times when they nearly split up—Perry and Tyler, the “Toxic Twins,” fought like brothers, and even mild-tempered guitarist Whitford briefly quit after Perry did—and more than a few issues with drugs and alcohol. By the grace of the rock and roll gods, today “we’re all healthy and happy and doing Vegas. Retirement? No. They are currently in residence at Las Vegas’s Park-MGM’s theater through June 4

Steven Tyler disturbing claim revealed by female TV host. In other news regarding Aerosmith and Steven Tyler, fans recently took to Aerosmith’s official Facebook page to discuss their favorite memories of the group over the last fifty years. Pamellla wrote: “Waited my whole life to see them live. Finally got to in Maryland. I stood directly in front of the stage. Having never been to a concert before, I had no idea what to expect. Steven spent almost the entire night right in front of me and they ROCKED! I was jealous I wasn’t the one picked to go up on stage. It was the best freaking day of my life!

Whereas Debbie said: “Hello! I wanted to say Congrats on being the Best Band! You were the first concert I have seen in 1973. Now my twelve-year-old grandson, Alex loves to play your music on the piano he has in his garage here in Michigan! He is self-taught and is just amazing. I would love to take him to Las Vegas to see you!”

Claire replied: ” Congratulations Aerosmith on your 50th Anniversary you are awesome I fell in love with you guys as a teenager in 1986 your music just made me sit up & take notice it was like I was hypnotized. My favorite member of the band is Joe Perry he is an amazing guitarist but I have to admit Steven is an excellent frontman again congrats guys.”

Steven Tyler ‘stealing’ from Aerosmith bandmate revealed. While Kathy wrote:” I saw you guys at Wake Forest July 4, 1976; I was six months pregnant, sat across the entire football field from the stage. Black Oak Arkansas, Bob Seger, Jeff Beck, and Aerosmith. It was the bomb! And I took my daughter to see them when she was 15( the second time she “saw” them.) She’s forty-three now!”

You can read the rest of the People feature HERE.