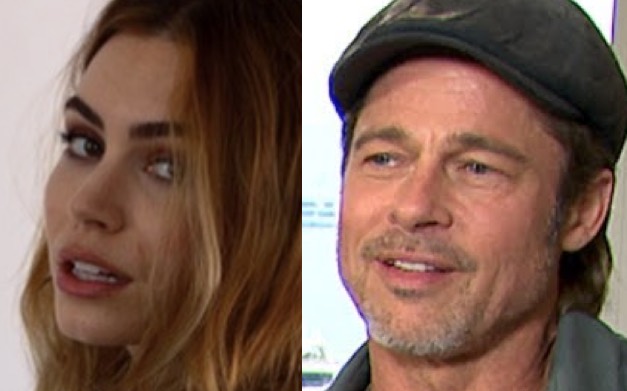 KISS Gene Simmons’ daughter Sophie Simmons filmed herself reading a Star magazine where the cover is about Brad Pitt and Jennifer Aniston. It says, ‘Jen Takes Brad To Cabo.’ She then opened the magazine and saw a photo of her father Gene eating a hot dog with her brother Nick. Star wrote, “On his 70th birthday, Kiss singer Gene Simmons was ready to rock – with a dirty-water dog in New York city.” Sophie said, “It escalates: ‘don’t tell mom I got hot dogs.’ Photos of Aerosmith frontman Steven Tyler’s daughter with Brad Pitt recently leaked.

Yiggity recently wrote on KISSFaq.com about Ace Frehley and Peter Criss hypothetically returning to KISS, “IF Ace and Peter took over for Tommy and Eric for the rest of this tour, who would be able to handle it better? (Yes I know the chances of this happening are nonexistent)

Peter’s retired and may not play very much at all anymore. Who knows but at least Ace is lethargically struggling through shows. Ace is deaf or close to it so click tracks and such might be a concern. Can Peter play to a click? Hed complain about the pyro being too close to him or something. Both are sober so that’s good. Gigi would probably be easier to be around on tour vs. Rachael but that’s just a guess.
A tossups me thinks.” Pete2174 said, “Bruce.”

Paul Stanley reacted to the death of a big name after Gene Simmons recently had a medical procedure. bassmansteiny responded to Pete2174, “Yup, this I agree with! Lol. As for how I voted, Ace. You need a good solid rhythm section and they have that with Gene, Eric and Paul. I love Peter, especially in his prime, but not sure he could do a entire tour, at least if I am to believe Paul’s book.

P.S. I know it won’t happen but I am still of the mindset, tour with all living members, Ace and Bruce’s bands can open. Then Pete sings Beth on the encore and all members jam on a couple of songs and maybe Pete plays Black Diamond. Kinda like Unplugged, but not acoustic. U know, one can dream, lol.” Gene Simmons’ daughter was recently filmed squatting in pajamas.