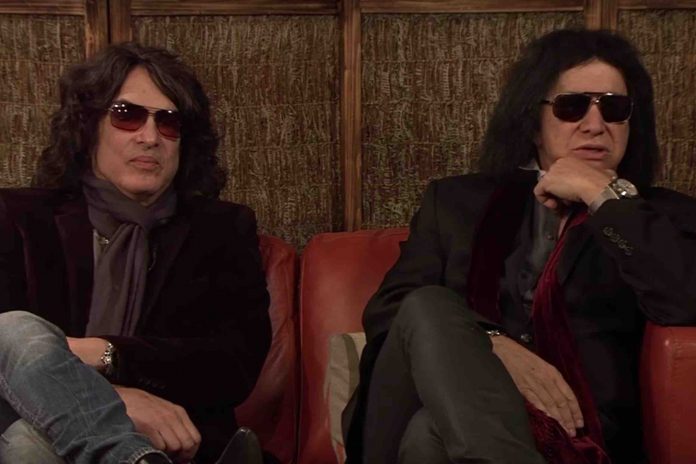 Stanley wrote on Friday, “EDDIE MONEY RIP. So sad to hear of his passing. I remember his first album which I LOVED. A fine singer through the years. My condolences to his family.”

Simmons wrote earlier that day, “Apologies to the fans in Salt Lake City. We will come back and do the show at a later date. The truth is, I have to fly to LA to do a medical procedure. Nothing serious. But it must be taken care of now. Thank you for your good wishes. All is well. 😊”

Gene Simmons recently revealed what his wife did with Jon Bon Jovi and Slash. KISS fans sent their best wishes to Simmons on social media and fan forums. Rockandrolloverman posted on KISSfaq.com, “For him to have the procedure done on an already scheduled concert day, with that many people paying and waiting to see them play, you know if something serious and HAD to have come up suddenly. That’s not a very good sign. It could be anything from shortness of breath, chest pain, to passing blood in the stool, who knows.

But for them to cancel the scheduled concert, the issue had to come up suddenly and has to be rather serious——- or else he would make his appointment a bit later on a day off. Rather concerned ova’ here.”

ludzil also wrote, “We are heading towards a difficult time for most of us. The artists and people in pop culture we grew with are getting older and unfortunately everyone of us has an exit date.

Just today, Eddie Money, who was one of my favorite artists of all time passed away from cancer. I’m not saying Gene has cancer or it’s serious, but he’s 70.

Life starts at A and ends at B. Make the best of it and enjoy as much as possible.
If you’re on the fence going to see End Of The Road, get off because once it’s gone. It’s gone. As I get older I’m more and more appreciative of the artists I got to see in concert.” Gene Simmons’ daughter Sophie recently reacted to her mother posting medical test photos.

EDDIE MONEY RIP. So sad to hear of his passing. I remember his first album which I LOVED. A fine singer through the years. My condolences to his family. pic.twitter.com/j22zMQfBXp