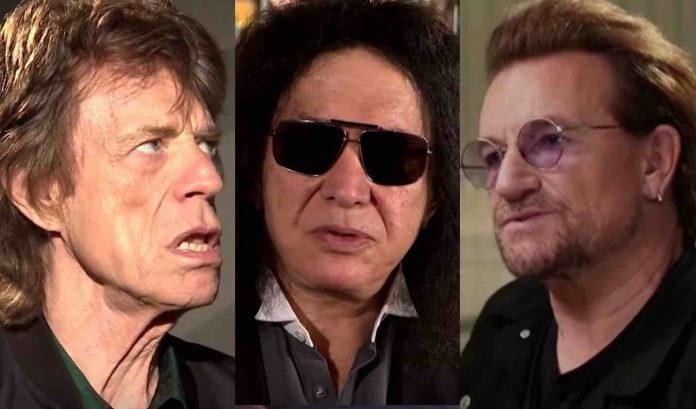 Gene Simmons, the iconic bassist for KISS, said that Bono of U2 among others like Mick Jagger, Beyoncé, Bruno Mars, and well, pretty much ‘anybody else’ would pass out from performing as KISS does.

Simmons made this tall claim in a recent interview with ET, saying that none of these performers could last more than half an hour performing in the KISS gear.

‘You got to understand — we love Jagger and Bruno Mars and Bono and anybody else, they’re all great, but if you put those guys — Beyoncé, put Beyoncé in my outfit with seven-to-eight-inch platform heels, dragon boots that each weigh as much as a bowling ball,” he said. “The entire outfit, studs, leather, and armor is about 40 pounds. The guitar and the studs is 12 pounds by itself. Then, you got to spit fire, fly through the air, and do that for two hours. They would pass out within a half-hour.’

Simmons believes that KISS is the hardest working band out there and he takes pride in it. Elsewhere in the interview, Simmons mentioned that he doesn’t believe that every band should be out there too long.

Simmons said that a band should have some pride and not stay too long, in order to always keep fans wanting. Simmons concluded by saying that he’s extremely blessed and grateful to be able to be in a band where he can wear ‘more makeup and higher heels than your girlfriend.’

KISS has been active for more than fifty years now. They have toured all around the world and entertained audiences with their extravagant costumes, makeup, and music. The band originally intended to retire after the 2000-2001 tour, but they decided against it. Simmons has confirmed that this won’t be happening again, as they really are retiring for good this time.