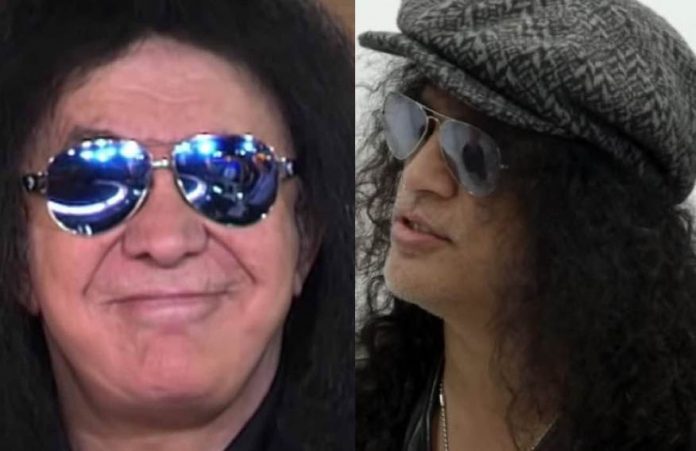 KISS icon Gene Simmons revealed his embarrassing but true secret feelings about Guns N’ Roses and Velvet Revolver guitarist Slash in a new Instagram post: he finds him to be an attractive man! From one good looking rock legend to another, it’s high praise! Gene Simmons recently revealed what he looks like with a shaved bald head in a stunning photo.

Simmons wrote to Slash on Instagram, “Happy birthday to this powerful and attractive man @slash.”

Simmons recently told The Standard about an artist that disappointed him compared to the great Slash, “I don’t want to say what’s in it — that would be like telling people what their Christmas present is in July. But it shames past shows. We’ve ramped things right up. If you’re running a race and see the finish line, do you speed up or slow down? When I was a kid, bands often disappointed me live. I saw The Byrds and thought, ‘I really like that song, but maybe I could close my eyes and like it even more.’

There was nothing going on onstage. They were just standing in front of their microphones. We’ve always wanted to be the band we never saw perform. To work our asses off and give the fans bang for their buck. Ed Sheeran is terrific and can sell out Wembley with just a guitar. But I don’t want to do that. I have too much energy inside of me. I want to blow up the sky.” Motley Crue frontman Vince Neil recently made a bold Gene Simmons claim.