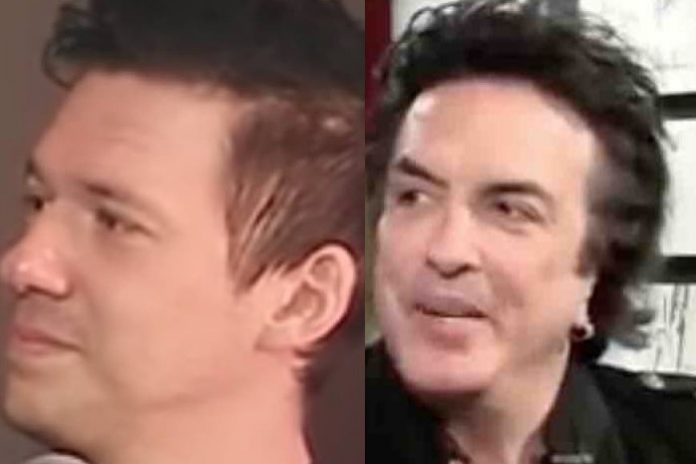 Ghost singer Tobias Forge has revealed to Ultimate-Guitar that KISS singer/guitarist Paul Stanley was in fact a major influence on him, and that he thinks he is a great guitarist. A Slipknot member recently revealed who ‘made out’ with Paul Stanley.

“I can’t tell you that because I’ve listened to music since I was first born and as long as I can remember and a lot of it was guitar music. I know that some records I listened to a lot when I get my first guitar [a black Fernandes Strat copy] that I sort of fiddled around with were KISS Alive and the first two Pink Floyd records, actually.

We had Pink Floyd records in our home but the first record that I got was a nice pair which was Piper at the Gates of Dawn and Saucerful of Secrets – it was two records in one. I’ve always played guitar to records or to radio or to TV. So I just end up playing over it.

That’s why I’ve never really been bound by tabs because I never wanted to play exactly what I heard, I wanted to step into the music as if I was playing guitar in the band.”

Ozzy Osbourne recently revealed the bold truth about Ghost. Forge added, “So if there was a solo, I would play my own solo, but you do have to learn to play the riff, so you have to pick that out. But I think that the combo of KISS and Pink Floyd, even though listen to a lot of other music, that might give you an idea of [how I write songs]. As long as I’ve been in bands I’ve been told that my writing is weird for some reason.

To me, it’s completely logical but I’m told there’s some weird timing, and chord changes and stuff and I can definitely attribute that to learning to play from Pink Floyd. Because that gave me that sort of psychedelic vibe that was especially featured on Piper at the Gates of Dawn. Then, later on, I started playing along to Slayer records, and Morbid Angel, and Metallica, of course.”

A Ghost fan recently thanked fans for helping him at a concert in Vancouver, “I have a walker and this was my first time attending a concert in many years due to illness. This was my first Ghost ritual and I was on the floor. Thank you to the 6 strangers who created a human barrier around me to protect me from getting whacked by people and calling people out who almost walked into me. A Ghost member was recently filmed begging a woman to buy an album.

You all took care of me and allowed me to have a great view. It made the night so much better and I got to relax and dance and not lose energy worrying about getting hurt. You all made my night!! Thank you so much!”