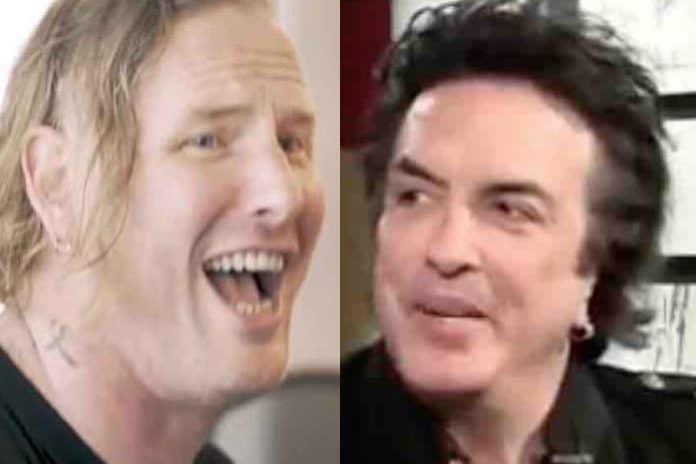 Slipknot frontman Corey Taylor recently told Adam Harrison in a conversation that a friend told him he made out with KISS icon Paul Stanley. Alternative Nation transcribed their comments. Slipknot recently revealed an insane System of a Down secret.

Corey Taylor: Well I hope not to let you down.

Host: I split my pants in the pit.

Taylor: You’ll have that, I ripped out a nipple ring during a Pantera pit in 1997. So that is No Bueno, I know that pain and it is No Bueno.

A Slipknot member was spotted with a ridiculous car.

Host: It wasn’t fun taking the subway home with half of your junk exposed.

Taylor: That’s when having a hoodie with you comes in handy because you can just wrap it just, like, single style.

Host: Right, and because they just gave us like, one song from the pit, which was “Shout It Out Loud” – a two and a half minute song, I caught one of Paul Stanley’s guitar picks. I thought I was super cool but at the same time I only got, like, two minutes so I didn’t want  to fiddle with my pockets so I stuck it in my mouth and I was like:

Host: I realized this is the one that he sticks in his tongue and spits out.”

Host: I told my friends and they were like:

“Dude you made out with Paul Stanley!”

Taylor: You kind of did. Through a third party, that is definitely up there with weird stories.

Paul Stanley recently made a sad claim after Gene Simmons had surgery.