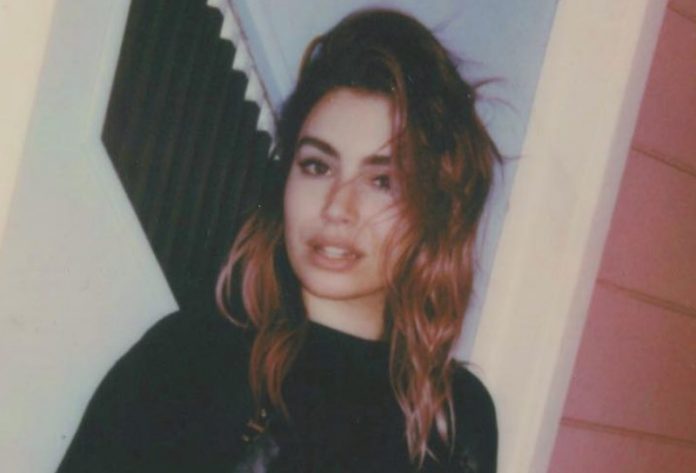 KISS are currently on their ‘End of the Road’ tour, and Gene Simmons’ daughter Sophie has appeared to possibly have joined them on the road, filming a video of a hot tub in a hotel room with flowers that Gene seems to have left for his wife Shannon. Sophie Simmons wrote in her video, which you can view below, “I dare you to be more in love than my parents.” Gene Simmons’ daughter recently posted photos of herself in a cowgirl outfit.

redinthesky posted a review on the KISSfaq.com forums of the KISS show in Brooklyn, “The show….you gotta give it to Kiss in one big regard, compensating for what the band is today, they pull out all the trappings. The show has to cost a fortune. The stage, while not ‘classic Kiss,’ is beautiful and the FX are pretty spectacular. No matter what one thinks of anything else, the show (and again, it’s a show) was very enjoyable and looked great.

The show seemed to go in phases. Paul seemed especially psyched about playing Brooklyn, and hit the stage on all cylinders (for Paul), with Gene kind of ho-hum at the start. However, Gene picked it up early on and pretty much turned the show into the Gene Simmons Show, he totally ended up dominating for a while. The Gene songs, I Love It Loud, War Machine, Dr Love, all killer. Paul though, kept up a real nice pace and held his own, especially on the 80s tunes Lick It Up and Heaven’s on Fire.

Tommy and Eric, they made a few flubs here and there but, and I’m not gonna pick on them here, they are drab guys and pretty much were non-factors for excitement. Gene and Paul are Kiss and those guys take a backseat far behind every time. Gene and Paul are stars – they are not.

Anyway, the show rolls along and it’s good for what it is. However, because every little thing is so meticulously planned out, it does become a bit boring in the middle because it’s so by-the-numbers.

What saved the show? Paul seemed to step it up, maybe he knew it was needed, and when he zipped (very fast) to his own stage, he was pretty much on fire. ‘Love Gun’ was fantastic, but the true showstopper of the night was absolutely ‘I Was Made for Lovin’ You,’ because dammit man, that still is a killer kick-ass song and it woke up a lot of sleepy people and people were singing and dancing. I thought it was the high point of the night.

Gene Simmons revealed a stunning Paul McCartney and John Lennon secret earlier this week. KISSFaq’s administrator later wrote in their review, “What did it all mean for me, who is constantly critical of what Kiss is today? Like I said, I went in with different eyes. I went in wanting to see some bombs and fire (and some of the fire was HOT all the way back too), sing along to some songs, and see Gene and Paul again, maybe for the final time. Those were my expectations, and I received what I expected. I was glad that both those guys (especially Paul) seemed to get into the show (even if a lot of the crowd needed some waking up sometimes). So yes, going into it like that, with just those expectation, I had a fun time, it was worth what I paid ($56) and I’m glad I went.” Gene Simmons recently filmed a video of his daughter dancing.