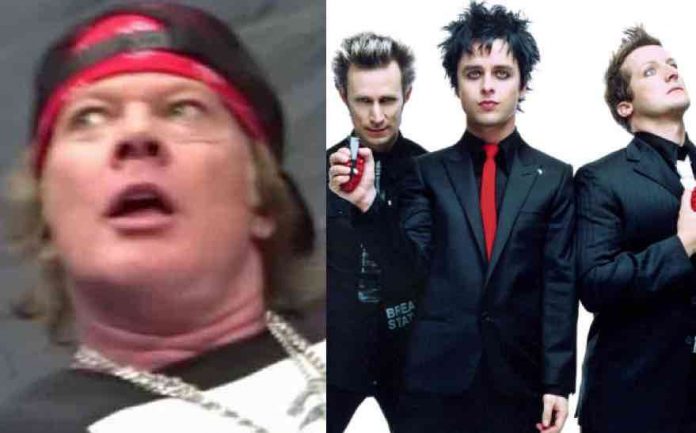 Green Day bassist Mike Dirnt has revealed a horrible photo where he superimposed his face onto Axl Rose, along with other big names.

Dirnt wrote, “@ronaldmcdonkey found these Way Back Wednesday pics of me!!! Let the shaming begin!!! #This is the definition of @hellamegatour 🦄 #UnicornsHaveMulletsToo.”

Billie Joe Armstrong commented, “John Stamos!!” Dank.iero_ chimed in, “Mike, who looks like a 50 year old and doesnt age any further and a mullet put together looks like an old dude trying to re-live the 80s due to his midlife crisis.”

A Reddit user named RzK recently accused Green Day of selling out on Reddit, after Howard Stern dropped a Green Day money bombshell earlier this week. RzK posted, “From this Ford pickup truck commercial of a shitty song, to just the whole revamping of the band… They were called sell outs with American idiot because it was different and I defended them, that album was a masterpiece and can be excused…

What they’re trying to do now by making Foxboro Hot Tubs the Green Day sound and look is stupid as shit…Honestly some of you people would lick Billie Joe’s ass and try to find good things about the taste of his shit rather than go ‘it tastes like shit.'”

Fishes1397 responded, “Green Day have been called sell outs since the first time they signed with a huge record label.” HexCodeBlue chimed in, “Hate to break it to you, but some people like the singles and are excited for the album.” Billie Joe Armstrong forgot lyrics to a Green Day song in a sad video earlier this week.