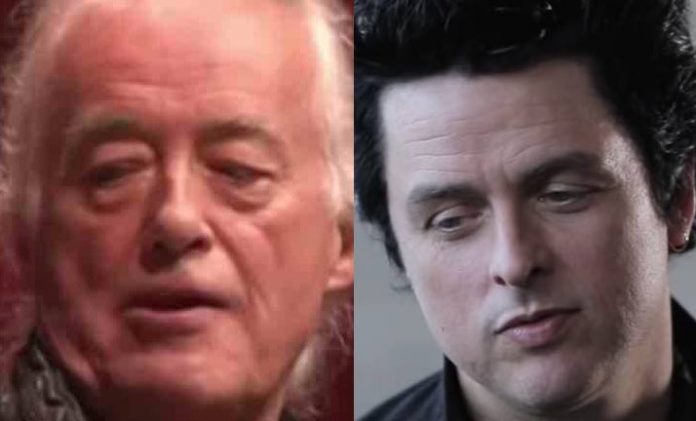 Green Day frontman Billie Joe Armstrong posted a photo of a television report saying that Jimmy Page and Led Zeppelin’s “Stairway to Heaven’ is the least dangerous driving song, while Green Day’s “American Idiot” is the most dangerous. A Jimmy Page drug rant over a concert was revealed earlier this week.

Pete Wentz: So, I remember, we inducted Green Day into the Rock and Roll Hall of Fame a couple years ago.And then we met, I think maybe at VMA’s- Before that.

Billie Joe Armstrong: I think in 2004. So yeah. I mean to me, just to speak to it really quickly, is that like I think people think that rock and roll is… like somewhere along the line it stopped being aspirational. You know, and I look at other genres that are kind of aspirational, and I’m like, “This is totally aspirational if you look at this tour.” Like, Dookie was a Earth-shattering record for me, and my whole generation. All my friends-And then, growing up with Weezer, like the first time seeing Buddy Holly I was like, “Oh, my God. Like what is…”Like, this broke my brain.

This video. And like, if you had told me in the 90s that you’re going on a stadium tour with these two bands, like that’s actually fucking crazy. It’s like, honestly wish fulfillment for our band. You know what I mean? Like, it’s-Yeah, we met as early as ’94 in Seattle, after a show we played together. Maybe it was a radio show. We met at a club after party. Billie Joe Armstrong recently made a brutal Prince death claim.

Pete Wentz: There’s a lot of great records that came out. I mean-You guys, I think… well that show was Rancid, Weezer, Green Day, Hole-And I think, I don’t know. Maybe it was something lame like Toad the Wet Sprocket or something. Then we played another crazy show in December at Madison Square Garden. And that was with Bon Jovi and Weezer, Green Day, Hole, Sheryl Crow. Who else was on that? That’s probably it. That’s all worth remembering. I remember being shocked at how well they went over. Because in my world, in 1994, it was like man, alternative had taken over-And if you were a hair band, it was like, you’re done. But they came out after Green Day, actually. They were the headliners. And Madison Square Garden went crazy. Singing every song.

Billie Joe Armstrong: I think they sold all the tickets to kids in New Jersey, though.

Pete Wentz: Well, I think the lesson I took from that was, even if the peak of your genre has passed, the power of great songs and a great legacy is worth a lot. Billie Joe Armstrong discussed his cocaine meltdown recently.