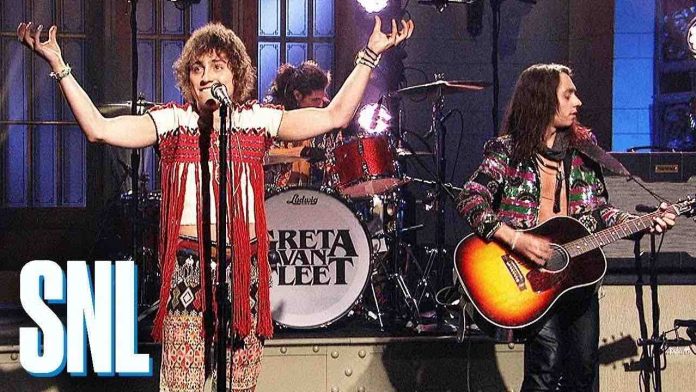 “We grew up watching all the old ‘Saturday Night Live’ episodes and Lorne Michaels, who we are huge fans of, we had this surreal moment when we left the stage and we passed him and he was shaking our hands and patting our backs,” Kiszka said. “It was so crazy and exciting. We were very honored to be a part of that sort of family and the legacy of ‘Saturday Night Live.’”

“I think we’re just excited to get back out to playing shows,” Kiszka later said about returning to the road for Greta Van Fleet’s headlining fall 2019 North American tour. “Even though this break hasn’t been a break from music at all … I wouldn’t have it any other way.” Kiszka told the OC Register.

Greta Van Fleet’s ex-manager revealed why the band ‘wasn’t ready’ to play on Saturday Night Live a few months ago. Dr_JohnZoidberg_ posted on Reddit, “How long do you think it will take for the ‘Greta Van Fleet effect’ to go into full force? Greta Van Fleet has proven that you can still get rich and famous off of making old-school rock n’ roll in the modern day. Usually, when something like Greta van fleet becomes popular, there’s a wave of musicians trying to mimic their success. Do you think this is going to happen?”

SonOfGaia294 responded, “It’s hard to say so early on. Back in the day, there used to be lots of copycat bands because of the musical culture. Take the arctic monkeys, there were hundreds of bands that popped up around sheffield because of the musical culture of the time. The reason was because of oversaturation. Nowadays music is a lot more worldwide and spread out, and it takes longer for copycat bands to form. Give it a few years when they’ve got a few number 1 albums, (if they do) then you;ll definitely have a load.” A Greta Van Fleet member was recently caught sleeping at a concert.

You can read the full OC Register interview with Jake Kiszka.