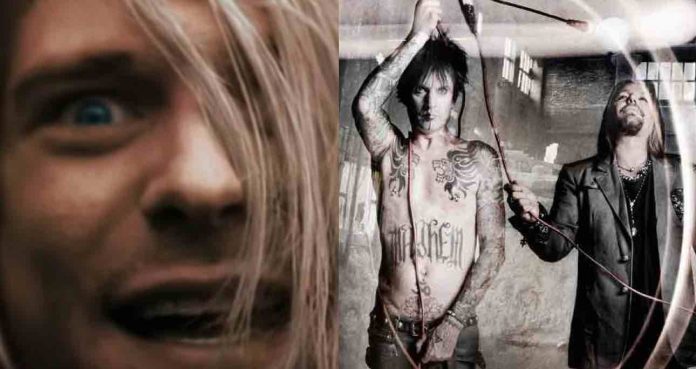 Motley Crue drummer Tommy Lee’s wife Brittany Furlan has uploaded a bizarre photo of Kurt Cobain drinking a beer with teen girls next to him. Brittany also wore a Nirvana shirt in a photo promoting the latest episode of her podcast Worst Firsts. A Motley Crue icon recently uploaded a photo of himself driving a ridiculous car.

She wrote, “Today’s episode of Worst Firsts features dancer, model, punk rock badass- @officialmalicemcmunn who I’ve known around the scene for years but never had a real chance to talk to.

This episode takes you on a journey through Alice’s life- from foster care, to homelessness, to drugs, to lesbian escapades, to now healthy sober living. It’s a wild ride. Also one of her first tats was ‘Too Fast For Love’ across her chest so you know she’s extra special in my book.”

A Motley Crue member was filmed yelling at his wife in a hilarious video. Kurt Cobain’s widow Courtney Love recently called the ‘Big Pharma’ Sackler family ‘terrorists’ on her Instagram page. She wrote, “Guess Whose making #targin (#oxycontin mixed with another thing) #endone( same) and overprescribing them plus #oxycontin in Australia? Why? #mundipharma is! The #sacklerfamilydrugcartel crises publicists ., #@purplestrat you can explain the #australian #opioidcrisis to us brought by the #sacklerfamilyterrorists ! ! Wtf ! . 😶😶😶💉💉💉💉💉😱😱😱😱😱#MAKEITSTOP #insanity #sacklerpain @truthpharm 😱😱😱💉💉💉💰💰💰💰💰Australia🇦🇺🇦🇺🇦🇺🇦🇺🇦🇺”

She also commented on the President awarding nearly $2 billion in grants to states and local governments to fight the opioid crisis.

“When someone does the right thing They do. Don’t yell at me. Here’s 2 billion dollars that there wasn’t before . 💉🙏🇺🇸♥️I did say #bipartisan issue, that’s what makes it an #opioidcrisis !! 🇺🇸🇺🇸🤔” Eddie Vedder recently broke his silence on Kurt Cobain.