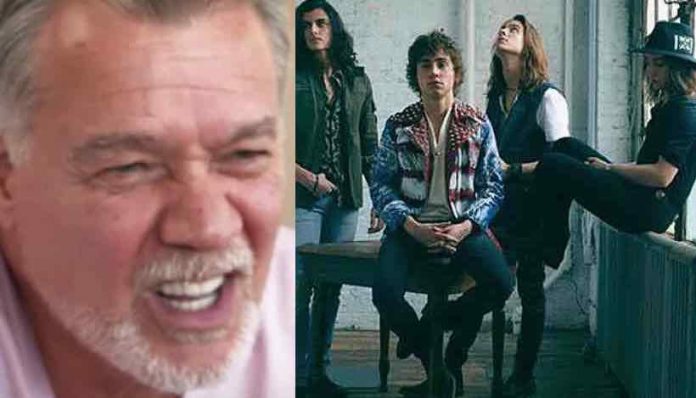 Greta Van Fleet have gained many fans, and haters, in their rise to fame in the last couple of years. Fans of artists like Eddie Van Halen and Led Zeppelin have accused them of being ripoffs, while others have called them the saviors of rock. Classic rock fans who hate the band will be sad to know that Van Halen are one of the reasons they have the sound they do.

Drummer Danny Wagner told Drum Magazine that the Van Halen brothers are key to his sound on Anthem of the Peaceful Army, along with John Bonham and Ringo Starr.

“You can really hear me channel both guys on ‘The Cold Wind,’” he points out, “but I’m also thinking Alex Van Halen. He has such a strong right foot, but his hi-hat playing is just as fierce. It can throw my balance off a bit when I concentrate on both of those elements, so I have to be careful.”

It’s good to hear that Greta Van Fleet have heard of Van Halen, unlike Billie Eilish, who infamously told Jimmy Kimmel last week that she didn’t know who they were. Van Halen fans reacted on Reddit to the news.

Dababbo posted, “I’ve heard of her but never heard any of her songs. We are of different generations and I don’t expect her to know all of the music I still like, just like I hope her fans understand that someone my age (just north of 50) may not have heard her music or other popular music today.

As for your point about Jump – maybe she has heard it but didn’t know the name of the band, just like it is possible that I may have heard a Billie Eilish song and had no clue it was her.”

CageSound wrote, “My son is 16 and lives with his mum, we didnt really connect over music but then i discovered he loves classic rock, he just didnt tell me. Also, i go to college and there a few young guys who are well into 60s/70s stuff, Floyd, Hendrix etc. So they’re not all ignorant, i think they make it their thing rather than going to us Gen X’ers for it.”