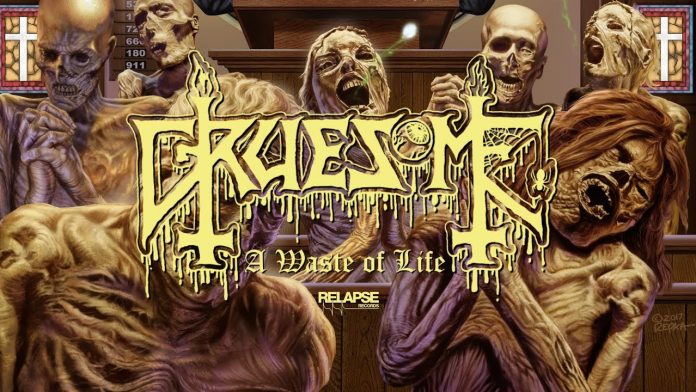 Gruesome, the worlds biggest Death worship band is back with a brand new album called Twisted Prayers. I was recently able to speak to vocalist Matt Harvey on this new albums as well as topics such as the direction of the next album and why he compares Gruesome to Kiss.

Its a continuation of what we normally do as Gruesome which is a Death tribute band. This time around we just focused on paying homage to Death’s Spirtiual Healing albums. The title is an homage to the religious themes of the album. When I work on a record or something the title usually just comes out. The title just stuck in my head.

Does this mean the last one will sound like Human?

How were you ablum to get James Murphy to help collab with the band?

Ive known him for awhile now. He worked on the debuts from both Exhumed and Decapikator. Me and him are good friends and i’ve been a big fan of his guitar playing since 1990. It was very cool as a Death tribute band having one of the guys play on the records.

I notice you guys put out albums pretty fast. How do you guys feel you can pump out music so fast.

One advantage that we have is that since we are a tribute band we have a blue print to work with. Each Exhumed album we have a new vibe and direction so we think of direction before writting. With Grueseome we just sound like Death so it’s easier. I’m also getting older so I have less time for procrastating including my own. I have no kids so I just have myself to yell at the get off my ass and work. I guess you can say we are like Kiss. We tour allot and put out albums all the time.Also with this kind of music we can’t write a hit single that we can just make money off forever.