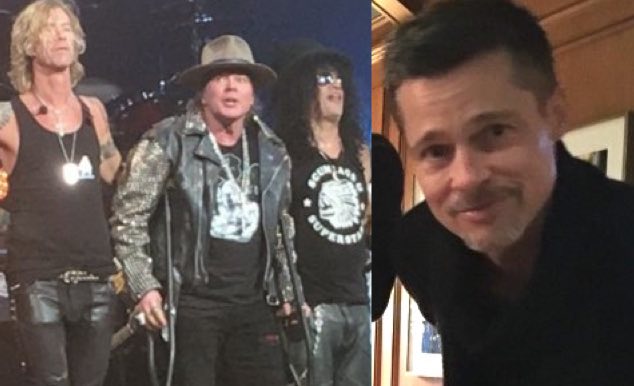 Fans waiting on a Guns N’ Roses biopic on Axl Rose, Slash, and Duff McKagan may not have to wait forever after the success of Freddie Mercury, Motley Crue, and Elton John films in the last year, and Duff recently revealed a secret: he wouldn’t mind seeing Brad Pitt play him in a GNR film when asked who could play him it it ever happens. Guns N’ Roses have been rumored to release a new album in 2020.

Duff told Metal Hammer, “Brad Pitt. Who else? Come on! I’m joking. I don’t know, I don’t think about stuff like that…so let’s just keep it at Brad Pitt.”

The amount of money Guns N’ Roses spent on ‘Appetite for Destruction’ was recently revealed. Former Guns N’ Roses guitarist DJ Ashba has stated in a new Vegas Junkeez interview that he has a new project in the works, “Pyromantic is just an awesome project where… basically, what it is is I’m taking four different genres of music — Latin, pop, rock and EDM — and putting it in a blender. I’m writing and producing the songs. I’m gonna play live with DJ. So it’s gonna be me on guitar, just full blown. And then we’re gonna feature different singers from different genres of music on the big screens and then videos and everything.

“This has been a two-year-long project,” Ashba added. “And it started off in the beginning, me and the singer from Sixx:A.M., James Michael, we had some time off and we started writing like we did. And it eventually evolved, and obviously, it went in a direction, and I pushed it really hard in a direction, and then James kind of got busy and went off [to do] his thing. But it’s evolved into this incredible thing over the last two years that’s just awesome. And to have congas and horns… And it’s very worldly. It’s designed to make the body move. It’s full-on dance stuff, but it’s great.”