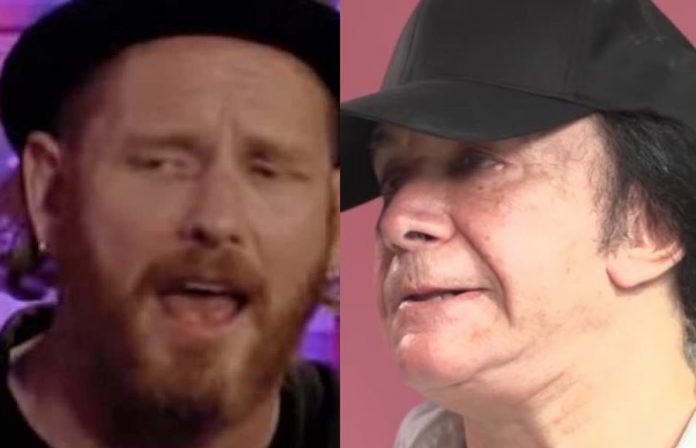 Slipknot frontman Corey Taylor was ripped by for promoting his fiance Alicia Dove’s Cherry Bombs project on his Instagram page by some negative so-called ‘fans.’ One tried to insult him by comparing him to KISS icon Gene Simmons. Simmons recently posted a shaved bald head photo from a film he’s working on.

Taylor responded, “@ghost_of_mr_p well that’s the dumbest shit I’ve ever read. What exactly am I selling you, ya mook? The f*** outta here you self-important c***.”

Slipknot’s guitarist screwed up a performance a few days ago, though he didn’t get as much criticism as Taylor. briarchitect also wrote to Taylor, “While I have built up respect for you, the band, and your work over the years, and you’ve rightfully earned it, these actions leave me with a bad taste in my mouth. Supporting your significant other is great, but using the platform and fan base and loyalty that you yourself have built-up, for YOU, is taking advantage. Introducing and sharing something you like? Cool, thanks! Constantly promoting work when what we want to see is you is wrong and using us to build up her success. Keep private/family and work separate, please.”

Taylor shot back, “While I respect everyone having their opinion, you’re on MY page. Not the bands’ pages… MINE. And if you don’t like what I post here, don’t follow me. You- nor anyone else- gets to dictate what I post on MY page. Which is WHY THERE ARE PERSONAL AND WORK PAGES. No, with all due respect… go f*** yourself, ya c***.”

Is Taylor in the league of Gene Simmons? We’ll have to wait and see if he can have the staying power of the KISS legend. Simmons recently made an embarrassing Slash comment.