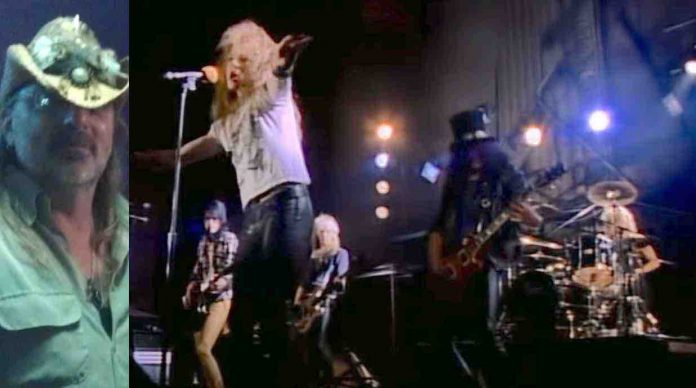 The first rule of the Internet is “don’t scroll down.” Comment boards are proof that the majority of the population has insufficient IQ, SQ and EQ to earn a license to run a mouth. Let alone vote.

But just once, maybe I’ll succumb to the temptation and get sucked down the rabbit hole into the black hole of dumbass negativity.

Just Ask Frank commented: “This is a guitar website. Who cares what an ex-manager, not to mention someone who doesn’t even play an instrument, thinks? Why are 3/4 of the stories about G’n’R on this website quoted from this guy? The only thing in this article that’s even related to music is the question about Peter Criss and Steve Adler, a couple of drummers. The rest is gossip.”

Just Ask Frank …. [is that a Zappa reference?] If it is may I humbly suggest that you shut up and play yer guitar.]

Yes. This is gossip. Well, more actually, casual conversation picked off a podcast, out of context and not specifically intended for Ultimate Guitar. Oh yeah. I have been a guitar player since my late teens. Very intimidating to even mention that given some of the great players I have worked with. Ya might wonder, how it was I found and configured Slash’s primary recording guitar. [Know your GnR history]. Would suggest I have some idea about guitars, right?

If you wanna talk guitar go check out Chris Buck.

Ghost of Casper commented: “He had a cell phone in 91?”

Ghost of Casper … yes, we had cell phones in 1991. They were fuckin’ expensive. Motorola as I remember.

Gibson SG user commented: “He just sounds bitter because he’s not in on the money to be honest.”

Gibson SG user …. What’s bitter about pointing out three outa five ain’t no fuckin’ reunion? Would you call McCartney, Ringo, Joe Walsh and Joey Molland a Beatles reunion? My question is why an S.G.? Always loved the shape but everyone who plays a guitar knows there are better instruments.

Severalsheets commented: “I had a few strokes in the back of a van too.”

Severalsheets …. Now, here at least we have wit and humor.

Ritchie77 commented: “Too many managers.”

Ritchie77 … Yes. I agree. I think Axl has had more managers than band members …there were at least three before me, then thereafter G Stein, Azoff, Merk and Doc –oh and now Team Brazil. According to Slash it takes eight of them to keep Axl happy.

Well. Congrats. They got him through two years of touring. I know what that takes. Well done Team Brazil!