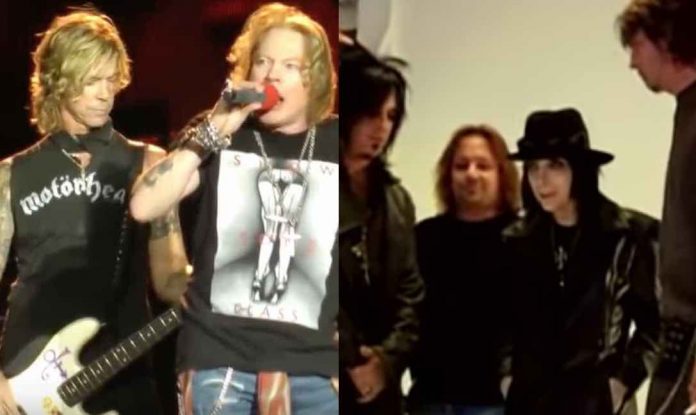 He told Metal Hammer, “I’ve seen The Dirt, too, and it kind of captured the darkness of the 80’s Sunset Strip scene. I’m going to watch the Elton John one when it comes out and I’ve got Lords of Chaos on my watchlist. But, really, I spend my whole life in rock and roll – I’d rather read a history book.”

A surprising new Guns N’ Roses EP rumor surfaced over the weekend. McKagan discussed having to get sober in 1994 in a recent podcast interview.

“My best friend Andy, we’ve been best friends since we were three. Andy came over and I heard him downstairs, my car was in the garage so he knew I was home. My keys and wallet were downstairs as well. So, I’m here like: ‘where are you, man?’ Well, he comes up the stairs and he sees me on the bed like, oh fuck!

It finally happened. I was bad for a few years before that. So he got me to a doctor, like two blocks from my house, an office. This doctor, his dad had birthed all of us kids. So it’s the doctor’s son had become a doctor. We go into the doctor’s office and I couldn’t talk, right? I could barely move. Even the car ride, just getting down from my bedroom was extremely, extremely, painful.”