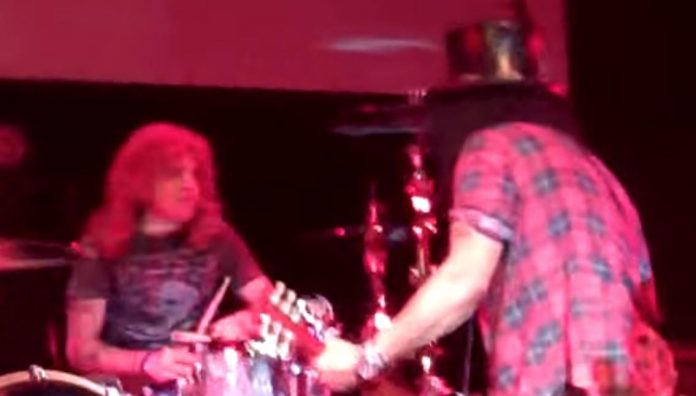 On Wednesday night at Sainte Rocke in Hermosa Beach, CA, it was a drummer face off between original Guns N’ Roses guitarist Steven Adler and Slash’s son London Hudson! Adler was behind the kit for his headlining set with Adler’s Appetite, while London Hudson was drumming for Classless Act. Who do you think won the battle of the drummers? Watch below and let us know in the comments!

Slash wrote on Instagram, “@classlessact NEXT SHOW -> December 26th with our friend @realstevenadler & @tantriccycle at @saintrocke Get your tickets clicking on the link in our bio! iiii]; )'”

Former Guns N’ Roses drummer Steven Adler said he is sad he is not playing with Slash in a recent LA Weekly interview.

“Slash is six months and one day younger than me,” says classic-era drummer Steven Adler. “I met him in eighth grade. He is probably one of the nicest, sweetest, smartest guys I’ve ever met. I love and adore him, and he means the entire universe to me. I’m sad that I’m not working with him. All I ever wanted to do was work with him. I know when we first met at junior high school, and he came over to my grandmother’s house, and I showed him my guitar that my grandmother gave me, he asked if he could borrow it. Within one week, he was playing songs. That’s how smart and talented he is.”