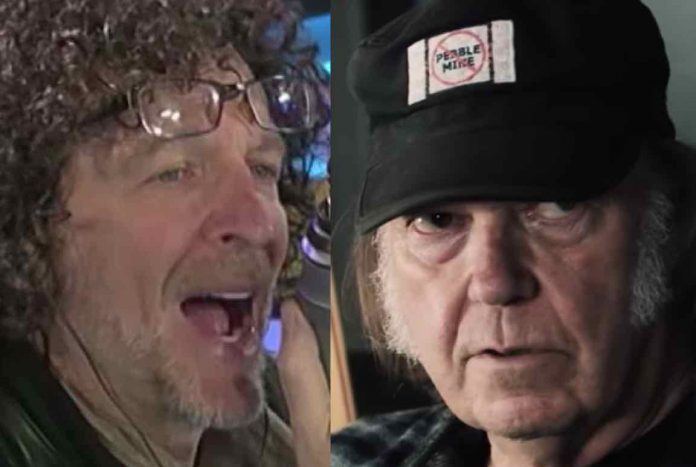 An internal Howard Stern staff meeting video recently leaked from February 2013, with Stern claiming he brought Smashing Pumpkins frontman Billy Corgan back from being ‘off the radar’ and demanding that his staff find a way to book Pearl Jam frontman Eddie Vedder.

Stern also claimed that he was the only media figure consistently discussing Rock and Roll Hall of Famer Neil Young on a regular basis, and took the opportunity during this meeting to criticize his staff’s perceived lack of ability of reach out to his management and PR team. Stern later got his wish, as Young was interviewed on his show the very next year in 2014. Alternative Nation transcribed Stern’s comments. He also made the disgusting joke that he was verbally ‘blowing this guy’ every day on the air.

“Neil Young is an ongoing project. I don’t know, who is talking about Neil Young on a daily basis? What media figure? I can’t think of one. I’m blowing this guy on the air every single day practically. Does he know it, does he get copies of it? He should be bombarded and shouldn’t be able to go anywhere without this information. Now when we are on terrestrial radio this kind of thing happens organically, they hear about us. Satellite is a closed system, Howard TV is a closed system. Neil Young shouldn’t be able to shit without hearing somebody talk about me.

[Howard goes to a new slide]

Why didn’t Neil [Young] choose us? I think I saw Neil on Jon Stewart. This is me sitting back in my room, remember that picture of my room and the sheets of paper? I kept writing shit like this down to the point of seething with anger. Angry at myself, angry with this crew because we’re not doing this stuff. Now we are gonna do it. Neil chose Jon Stewart over us. I guarantee you Jon Stewart hasn’t spent a minute talking about Neil Young on the air. Jon gave him one plug, one plug rather.

I’ve seen rock stars go on there, one plug and he’s gone, but management’s like: ‘Stern’s dangerous or whatever.’ We aren’t even really on their radar, and we have to be on their radar. Neil doesn’t know what we do, he doesn’t know that we can offer him a live concert. One of those things that that they did for Bon Jovi yesterday on Sirius – we can leverage using all of Sirius with the [inaudible]. We bribe them, we offer them stuff, we find out what appeals to them. We have to become part of their marketing strategy because that’s what professional organizations do. We say: ‘What do you need, here’s what we think can offer.’