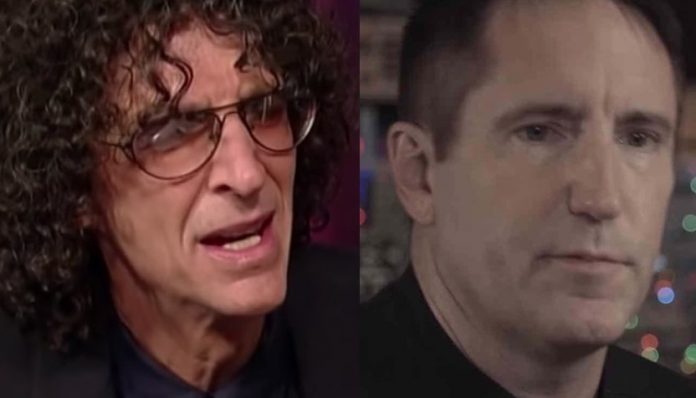 Howard Stern thinks Trent Reznor is one scary dude! During a recent edition of the Howard Stern Show, the always controversial shock-jock had on the Foo Fighters as his guests. One of the topics that came up was none other than fellow rock icon Trent Reznor – frontman for Nine Inch Nails. Stern would discuss what the Foo Fighters’ current relationship, if any, is with Reznor and applauded him for being such a ‘bad ass’.

Howard Stern is ‘worried’ about this shocking health rumor. Dave Grohl would state that he’s worked with Reznor before and add that he’s a ‘master’ of what he does, praising that he can engineer his stuff as well. Continuing, Grohl would add that he met Reznor originally in the early 1990s and that the Nine Inch Nails singer was in a ‘dark place’ so the self-described ‘scary’ persona seems to be a part of him. However, Grohl would also say that he hasn’t seen Reznor in years but was asked to play drums for a new Nine In Nails album. He would conclude by saying that he believes Trent is currently doing great in his life as of right now.

In other news concerning Nine Inch Nails frontman Trent Reznor, the beloved industrial rock star stated in a 2014 interview with The Hollywood Reporter why winning an Academy Award feels more sincere in comparison to winning a Grammy. Reznor would win an Oscar for ‘Best Original Score’ for his work involved with ‘The Social Network’. Credit to the outlet for the following remarks.

“Having won a couple of Grammys for stupid s**t — best metal performance — it’s hard to feel good about the integrity of that. If that’s how much you’re paying attention to what you’re giving out, why should I think that means anything?” Reznor said of the Grammy Awards.

He continued, “When the Oscar [nomination] came up, it felt very different. I can’t tell if that’s because I’m older or it felt like it’s coming from a more sincere pedigree. … And particularly in a field, we’d just gotten into, to see that, ‘Hey, you think [we] deserve this?’ It felt nice.”