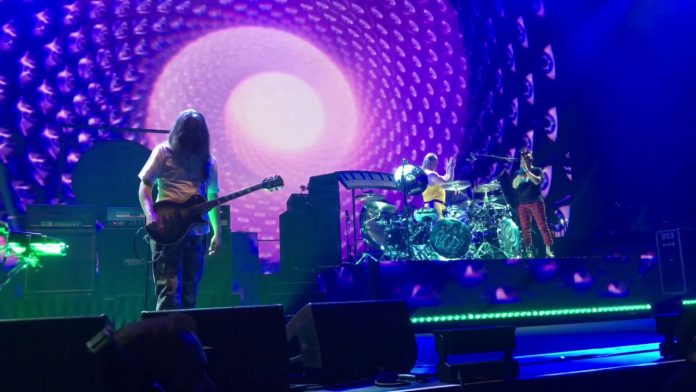 Tool drummer Danny Carey recently came across a mishap during the band’s show. Quite amusingly, he was spotted getting his snare drum replaced but that too mid-song.

Danny Carey have his snare drum changed during performance

In a video clip that surfaced from one of Tool’s shows, Carey was seen swapping his snare drum. The swap happens during Tool’s live performance of “Grudge” from the 2001 “Lateralus” album. Danny’s drum tech Joe Paul Slaby swoops in right around the “controlling” lyric.

Dany proceeds to play all the parts without missing a beat, using one of the toms instead of the snare. The whole thing took about 20 seconds and Danny can be seen smiling back at his tech. You will be amazed to watch the whole incident below:

The band previously debuted a new song live on tour. Tool also recently returned to Las Vegas for the first time in almost a couple of years on a Saturday night. The veteran metal band has now staged two of its past 30 performances at T-Mobile Arena, the only venue that’s hosted Tool twice since the group released its fifth album, Fear Inoculum, in 2019. The band also recently went to San Diego, south of their home in Los Angeles, for their concert at Viejas Arena. Recently Tool guitarist Adam Jones also made a huge mistake ahead of their recent show.

A similar incident took place involving the late, great guitar legend Stevie Ray Vaughan. Stevie Ray Vaughan broke a string mid-solo and needed to switch guitars. With the help of his guitar tech, he was able to pull off the smoothest guitar switch, maybe ever.