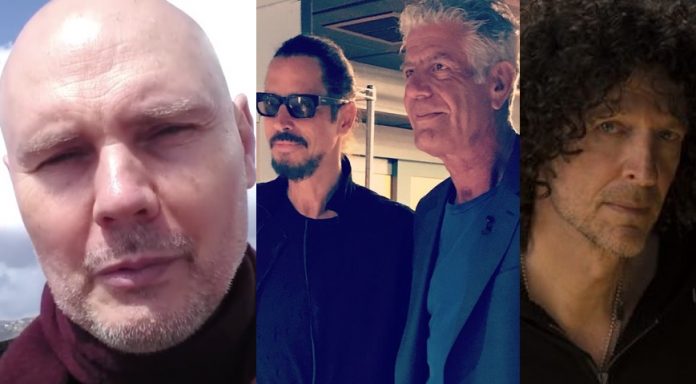 Howard Stern and Smashing Pumpkins frontman Billy Corgan recently discussed suicide in the wake of Chris Cornell, Anthony Bourdain, Chester Bennington, and Kate Spade dying by suicide. Corgan opened up about seriously contemplating suicide when he was younger, and Stern asked Corgan if he would ever consider doing it now. Alternative Nation transcribed their conversation.

Howard Stern: Thank God you didn’t kill yourself, I would have been so pissed off at you.

Billy Corgan: My son would be mad too.

Howard: Everyone would be mad. There’s no chance that I’m going to read in the paper that you did this one day? Like all of a sudden you tied yourself to a door or something?

Billy: No. As somebody who has stood right on the edge of taking my own life, I am not only firmly against it, I would say that it is never worth it.

Howard: Good. But you still get dark inside right?

Howard: What is the secret? What do you do to make sure you don’t take that extra step?

Billy: To me it is a spiritual question. This is my version. You are saying to God, I don’t accept my circumstance, and I’m going to stop this game. The secondary part of that is you are saying, ‘I can’t imagine a tomorrow where there will be laughter or happiness.’ That is unfathomable to me now, and that’s what keeps me going. I think of my son. I think about how I could sell everything and move to an island.

You do what you got to do to get through, but under no circumstances, I would say maybe the only asterisk is if there is a health issue, but that’s a totally separate question, but if you are healthy in head and heart, I can’t imagine a circumstance where you would take your own life. Anybody in our business who has I really grieve for them and their families, because God gave them so much, and we lose so much when we lose those people.