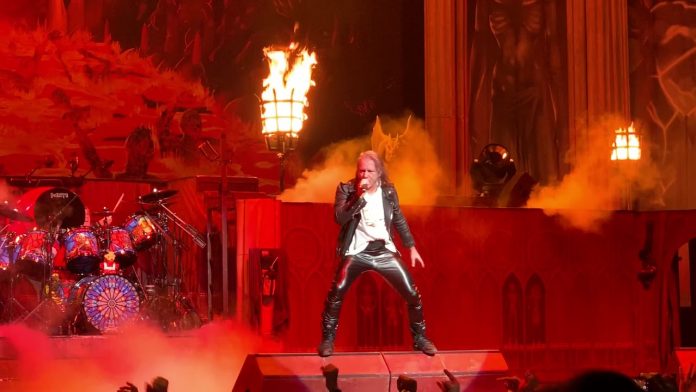 A video clip has emerged of Iron Maiden frontman Bruce Dickinson. It saw him physically kicking out a fan from the stage at the band’s Anaheim concert last month. The video clip has drawn some attention after it recently surfaced.

The incident took place on September 22, during the set closer, “Aces High”, when a fan breached all the way to the left side of the stage, where he tried to get both Dickinson and guitarist Janick Gers’ attention.

The singer then proceeded to grab him by the hand and try to take him to the back of the stage, but instead, the fan walked toward the center close to bassist Steve Harris and started to headbang along to the song.

Dickinson was having none of it, and grabbed him by the back of the shirt with force, dragging him towards Iron Maiden stage security to be escorted off the area.

This is not the first time such incident took place involving Dickinson. He has a history of publicly admonishing fans and security at the band’s concert if he feels like they are out of line.

It was back in July that the singer made headlines when he blasted a fan as a “Greek c*nt” and a “f***ing c***su**er” for lighting a flare during the band’s concert in Athens, Greece. Back in 2019, he stopped a Maiden show midway through to slam a Tacoma, Washington venue for a violent and bloody incident in the crowd for which he claimed the venue’s security was to blame. In 2012, Bruce called out a fan at a Indianapolis show who had been texting for three straight songs.