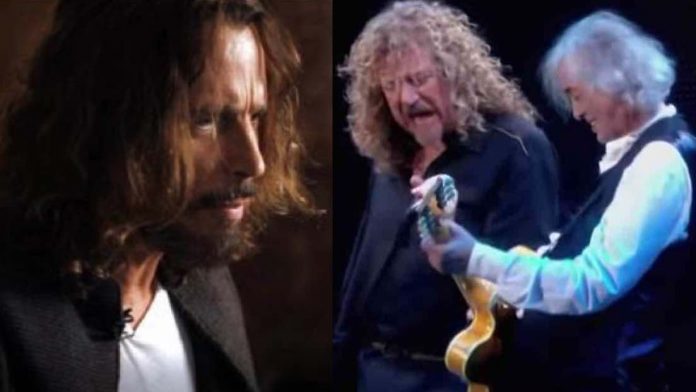 A never before seen photo from late Soundgarden frontman Chris Cornell‘s final meeting backstage in summer 2015 with Led Zeppelin guitarist Jimmy Page has surfaced from photographer Ross Halfin. Previously photos of Page with Cornell backstage at a 2012 Soundgarden show and at a 2014 live conversation were some of the only available photos online of the rock icons. Chris Cornell recorded a secret Led Zeppelin tribute song that was detailed last year. Halfin wrote on his blog:

The 4th of July, Soundgarden Hyde Park, London 2015. I thought of this song today which is why I’ve posted this. I thought I should put some pictures up. A bit of a celebration of them, here they are with Jimmy Page, who I went to the show with.

They played the whole of Superunknown on a beautiful day in London.

I would share some more memories, but I’m working on a book right now, and I’ll write a lot more in there.”

Led Zeppelin guitarist Jimmy Page sent a video message that was played at the Chris Cornell ‘I Am The Highway’ tribute show before Soundgarden took the stage in January.

“Hello, I’m Jimmy Page, and I’m actually over here in London sending this video link to Matt, Kim, and Ben. I wish I could be with you there evening, but believe me, I’m there in spirit.

I want to congratulate you on getting this event together to celebrate Chris’ music. I also want to say that [I love] the input that you put into Soundgarden from the records, because I got hooked on your music from the first album.

I also came to hear you play, and I was always astonished at the way you were all glued together. For me it’s what a band is all about. Have a wonderful evening.”